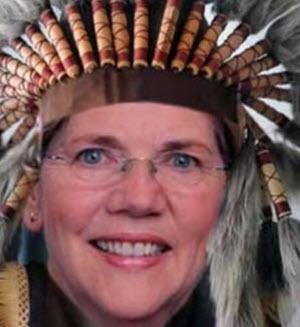 Is Massachusetts U.S. Senator Elizabeth Warren on the warpath against Donald Trump?

When I was a kid and we’d play cowboys and Indians, this was the noise we always made.

Say it three times fast while dancing in a circle.

We were just white kids of Irish ancestry, but we’d pretend to be on the warpath.

We thought it was crazy fun when our own English Meemaws would scowl at us and say, “Savages!”

We’d tie the neighborhood kids up to a nearby pine tree, dance in a circle around them, and wave some rubber tomahawks with bright orange feathers and threaten to scalp them.  Sometimes, the captured kids would get loose and then grab their cap guns and shoot us point-blank.  But we were ghost warriors, and those bullets failed to stop us.  Pretty soon, we’d round up everyone in western wear and tie them up again, dance our war dance, wave our tomahawks, and make what we thought were Native American Indian noises:  “Whoo!  Hoo!  Hoo!  Hoo!  Hoo!”

Idle child’s play that is now almost certainly outlawed and would land children in Federal Kiddie Court today. Or maybe, Indian Kiddie Court because Native Americans do have their own Tribal Justice System.

Is Pocahontas one of them?

I mean, is Elizabeth Warren one of them?

Because she did have some kind of law career before she became a Socialist, uhm, I mean, Democrat.

But whether Warren is native American or just has high cheekbones or just believed her Meemaw and Pawpaw’s stories, she’s one heck of a warpath dancer!

Nowadays, the warpath is what passes for politics at the highest, upper-echelons of U.S. governance.

Warren shows that she can dish it out: Trump, she says, is “dangerous,” “reckless” and “embarrassing.” And, wait for it, then comes Warren’s threat to Trump: “Your free ride is over.”

That part reminds me of when then-candidate Ronald Reagan groused that he’d “paid for that microphone!”

But can she take it?

Because you know what we call people who can dish it out but can’t take it?

Bullies.  And sissies.  Call it a hybrid– a bully-sissy.  That’s what Elizabeth Warren is proving herself to be.

Warren, a long-time Donald Trump “hater,” called the millionaire businessman now running for the highest office in the land “a man who cares about no one but himself. A small, insecure, money-grubber who doesn’t care who gets hurt, so long as he makes a profit off it.”

For just a sec there, I thought Warren might be ranting about Dick Cheney, a former Halliburton defense contractor-turned Secretary of State and then Vice President who made millions and millions as his higher-ups plunged American into the chaos of an interminable Middle East war.

Or maybe, just maybe, Warren was spewing about George H.W. Bush and any number of the little shrubby offspring who made millions from the Carlyle Group, a business group heavily invested in Middle East projects.

Or, gosh-darn-it-all, could Warren be taking aim at the Clintons?  And their mysterious foundation which seems to receive and roll-around millions and millions in “donations” and then provide handsome paychecks for Bill and Bill and Hill’s daughter, Chelsea?

When U.S. President Harry Truman left office, he headed back with his homely wife to his remote farmhouse in Independence Missouri, and moved in with his mother-in-law.  Truman spent his declining years in genteel impoverishment– the last U.S. president to do so.

So how did former U.S. presidents manage to become millionaires and billionaires in retirement?

But let’s get back to Elizabeth Warren and her warpath.

When reporters asked Trump to respond to Warren’s diatribe, he laughed and called her “Pocahontas”– as in the Native American heroine who led Lewis and Clark across middle America, from sea to shining sea.  Maybe it’s just easier to call Warren “Pocahontas” because this is the one Native American name that everyone actually knows, mostly because of the Disney cartoon movie.

And hey, I just noticed the word “tribe” in “diatribe,” and so maybe that means something.

But Trump didn’t mean it as a compliment to what Warren calls her “proud membership in the Cherokee Nation.”  He also called Warren “goofy.”  And he wasn’t impugning one of Snow White’s seven dwarves.  Trump really does think that Elizabeth Warren is “goofy.”

Trump is laughing, calling Warren “Pocahontas” and saying she’s “goofy” because Warren’s long-held claim that she is a Native American (dare I use the word?) Indian– specifically, a member of the Cherokee Nation–  have been expertly debunked, and by no few numbers of Native Americans who might say that it takes one to know one, and Warren isn’t one.

As in, a Native American.

Some Native Americans (and no few “Trumpers”) are all outraged and claiming that Trump is calling Elizabeth Warren to task for claiming to be a Native American– a claim she’s publicly made but apparently cannot prove.  And she also cannot disprove abundant proof that, as Trump crowed earlier this week, “I think she is as Native American as I am. OK? That I will tell you.”

Then, Trump hit Elizabeth Warren where she is most vulnerable: The possibility that she used her claimed Native American ethnicity to get her cushy teaching job at Harvard University.  Or, at the very least, helped Harvard out with its ethnicity quotas– tallies kept by the Federal Government to ensure educational diversity.

Warren’s disputed claim to be a Native American came out way back in 2012– long before Trump ever publicly eyed running for president.  When challenged, Warren claimed that her ancestry was “1/32nd Native American,” and her responses became increasingly shrill: “At some point after I was hired by them, I ... provided that information to the University of Pennsylvania and Harvard,” Warren claimed, adding: “My Native American heritage is part of who I am, I’m proud of it and I have been open about it.”

But as Trump points out, except for her Meemaw’s stories about how the Warren women got their “high cheekbones,” Warren’s been unable to prove her claims, even as to just being “1/32nd” Cherokee.

And the Cherokee don’t mess around with who belongs, and who doesn’t.  There’s a list– honest to goodness (notice how I avoided saying, “Honest Injun!”) of Cherokee tribe members, and Warren’s not on it– nor could she ever be.  http://www.theatlantic.com/politics/archive/2012/05/is-elizabeth-warren-native-american-or-what/257415/.

Does Warren’s honesty or dishonesty about her “Native American heritage” matter?

It may mean more than it does now, if Warren teams up with current U.S. Vice President Joe Biden to run on the Democratic ticket.  Biden’s been called on the carpet for plagiarism going back to his law school days, and extending forward throughout his political career.   https://www.plagiarismtoday.com/2008/08/26/the-biden-plagiarism-scandal/.   Now, plagiarism may not be in the same category of uttering Native American ancestry falsehoods as is Warren repeating her Pawpaw and Meemaw’s spurious claims to Native American ancestry.  But together, it just cooks up a rather unappetizing stew of, well, call it “a trend towards dishonesty,” or perhaps just a tendency– but a marked tendency– to not care whether a statement is true or false.

Especially if the speaker gets a benefit from the statement.

As unlikely as it is to ever happen consistently in politics, Americans decided as far back at least as Richard Nixon, that they wanted truth-tellers for their Commanders-in-Chief.  And the Democrats largely claimed credit for this development.

What Donald Trump has going for him is that he’s being given a learning curve, so that his misstatements seem to be the glib toss-outs of a talented, engaging amateur.  But the election’s coming up, fast and furiously.  Trump will soon be called to meet a much higher standard.  But this means that Elizabeth Warren, a very experienced politician, should also know better.  Hear those war drums thumping out the beat?

The upcoming Democratic National Conventions promises to be one great big angry powwow!