GOP's Trump vs. Clinton cry: Vote for the Racist, It's important! 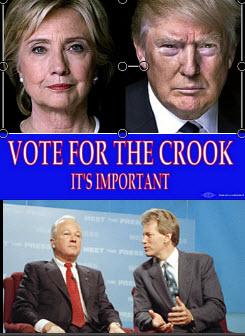 This current race for US presidency involving Donald Trump and Hillary Clinton, has a fascinating historical  parallel.

Roughly twenty-five years ago, then-thrice Governor Edwin Edwards was in the election race of his life.  Four years prior, he ran for the mansion but decided not to continue the gubernatorial effort.  His abrupt departure from the governor’s contest led to a Buddy Roemer administration at the Baton Rouge State Capitol, starting in 1988.

In 1991, however, after facing two criminal trials in federal court, Edwards went head-to-head with a man, who also had a past but who possessed as big of a name and following as did the governor.  Edwards’s new opponent?  No other than David Duke, the infamous.

Years prior, Duke had won the District 81 state seat for House representative. He convinced an angry, fearful white suburb of New Orleans that he no longer a Klansman or a racist and that he never had any anti-Nazi sentiments.  Duke ran as a Republican and he gained power and political credibility, almost single-handedly taking down fellow-republican Governor Roemer’s fiscal reform package.  Despite news stories and research by a group called the Louisiana Coalition, that was formed to present the truth about Duke, the blue-collar and lower-income whites, many of them Democrats, were convinced that Duke was their answer to affirmative action abuse and other reverse discrimination “wrongs” impacting the nation.

So, the control over the future of Louisiana, in terms of reputation and administration, came down to a battle between a man viewed as a rascal, at best and a felon, at worst—versus—the racist.   The governor’s election came down to Edwards against the former Klansman Grand Wizard, neo-Nazi, who had just convinced the majority of whites in a prior election for Louisiana US Senate, that he was now just a conservative Republican.

Due to the principals involved, the anti-Duke election slogan and bumper sticker at the time came down to, “Vote for the Crook, It’s important”.

It turned out, the comical slogan was not far off.  The business community, mainstream Republicans, Democrats, tourism folks and others garnered forces and defeated the man who had been selling racist materials out of his legislative office.  Louisiana elected the “crook”, who later was convicted and spent time in jail for activities arising out of his new “fourth” term in office.  Oh, by the way, the man, formerly wearing the hood also spent some of his own time, donning some stripes, courtesy of the IRS.  He then spent some time in Russia and lecturing in Iran that the holocaust was a hoax.

So, fast forward those twenty-five years to the now-2016 US election.

Businessman Donald Trump defeated 17 candidates in the super-conservative republican primary.  Despite his statements that shocked much of America’s human sensitives, Trump has become the standard bearer of the Republican Party.

Despite campaigning on “building a wall” which insulted Hispanics and “keeping Muslims out of the United States”, that has peeved off 1.5 billion or so people worldwide, and regardless of the most outrageous statements against women and his own primary opponents, Trump triumphed as the king of the GOP hill.

Not surprisingly, despite the abuse absorbed by former Presidential candidates such as Louisiana’s Bobby Jindal and Senator Marco Rubio and politicians such as war-hero John McCain (and the list goes on), who at times have eviscerated Trump for his bizarre and hateful comments, they caved in to embrace their new party symbol.

Alas, this past week, after hoping that Donald Trump would act his age instead of a small-minded juvenile, the Republican leader has once gotten himself into another race, ethnicity and religious hornets’ nest.

Regardless of the accuracies or truth of Trump’s latest protestations, Trump, once again, has infuriated and embarrassed the party leaders.

After his Hamlet-like open tug-of-war, House Speaker Paul Ryan reluctantly backed Trump.  The next day, he said he was “shocked” by Trump’s latest “left field” remarks regarding a federal judge, of Hispanic dissent.  Trump is claiming the Judge cannot be fair because he is Mexican and because Trump is “building a wall”.  A few days later, when asked about Muslims, Trump acknowledged the same could be true about a Muslim Judge.  While he now points to the judge’s membership in an professional judicial organization, called “La Raza”, when Trump first slammed the Judge, he made no mention.  Only after Trump went into protective damage control mode for his incindiary  remarks has Judge Curial’s affiliation become an issue.

Marco Rubio, again frustrated, admitted he warned us about Trump, but still will endorse him as a candidate.  Same with Senate Leader Mitch McConnell.   The faces of the Republican Party—almost to a man (and woman) still back him personally, or support his candidacy.  They claim, and perhaps it might turn out to be true, that Hillary is the worst of the two evils, with one they simply cannot live.

Today, Ryan, during a statement said, “claiming a person can’t do their job is sort of like a textbook definition of a racist comment”.  He then went on to say, that Trump’s statement absolutely should be disavowed and is unacceptable.  Despite forever being embarrassed by the GOP candidate’s statements, Ryan however is still backing a man he seems to admit is talking like a racist over his backing Hillary Clinton or remaining on the sidelines.

Ryan, of course, has not been the only high-GOP official to be humiliated and disavowed Trump’s statements as being racially-charged.  Newt Gingrich, McConnell have joined in that camp.  So have others.

Various political experts, however, are now claiming that Trump could be so toxic that he just might bring the entire party down nationally.  They claim, his very strength during the primaries is churning into his general election weakness.  Expert after expert are now pointing to the prospects that the GOP is now vulnerable at the Presidential level, the Congressional and in the State house levels, too.  While, Trump’s rhetoric offended so many of us during the primary, there were enough Republican faithful and crossovers to take the businessman to the political “Promise Land”.

However, times appear to be a-changing.

While the strident right-wingers, who see Trump as their redemption and their last-white hope, are going to defend his every word, the rest of America, including Asians, Hispanics, Muslims,  majority of women and others, who have found his repeated hate-based utterances, totally offensive, won’t.

He will still win Louisiana and other states in the Deep South.  The chances of his winning the swing states and those that require a broader coalition of minorities to prevail, now appears at risk.  The same goes for the party down-stream team.  Trump is pulling them down along with him.  They know it and so do party leaders, who publicly claim to be shocked yet remain loyal.

One US Senator Lindsay Graham, who has flirted with joining the Trump camp has been the most vocal, claiming at some point, it is more important to put country over party.

Indeed, Hillary Clinton has her many warts.  Democrats might be smug right now but they could also face their moments of reckoning, should she be indicted by the feds.  Even if she escapes the FBI probe, there are emails rules, the Clinton Foundation, fundraising speeches and other questions that need answering.

Trump also is no angel.  He just might have defrauded many in Trump U.  Records are now being revealed that track his campaign contributions to certain State Attorney Generals who decided not to prosecute Trump U. claims in their respective states.  Then, there is the issue of his not revealing his tax records which could tear the scab into raw skin pus for the world to fret.  Already, we know, he has claimed a golf course that he owns to be valued only four percent property tax purposes compared to the value he claims for federal election purposes.  The evidence appears clear that he wanted to evade the higher property taxes while, inflating his own so-called 10-billion-dollar worth.

So, in many ways, this Presidential race 2016 has all of the makings of the classic Duke versus Edwards match.  Back then, the good people of Louisiana held their collective noses and decided the smell of electing a former Klansman, neo-Nazi reeked so much more than their voting for a politician, wily enough, that he just had not gotten caught.  Yet.

The difference between that election and this one, however, is stark.  Duke disguised his past.  His followers bought into this new redeemed man “put-on” because he said what they wanted to hear.  Right now, Republican super conservative primary voters brought this man to power.  Notwithstanding his so many outrageous statements, he said what the voters wanted to hear.  Party regulars are engaged in public anguish and blood-letting, yet, they see Trump’s statements overtly or smacking of racism, ethnic-baiting and bullying in living color, not like Duke, hidden behind dated video.  They publically nod their heads in disgrace, say it looks, sounds like racism, yet, “Trump’s still our guy”.

For them, at least right now, their cry is “Vote for the racist.  It’s important”
Tomorrow, it could be a different cry—“it’s too late”.