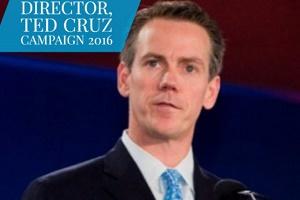 If you think “data” and Republican Party, think Chris Wilson, the CEO of Wilson, Perkins and Allen, a national campaign data firm.

Wilson is the former Director of Research, Analytics and Digital Strategy for the  2016 Ted Cruz Presidential Campaign.  That campaign was the most data analytics-driven of all republican political campaigns in American history.

Because of Cruz and his team, Wilson had a seat at the senior campaign table.  Thus, in that role, he helped Cruz and company with major decisions, and most importantly, created, literally speaking, the predictive data models, that fueled the candidacy.  As a result, figuratively speaking, other political campaigns will be following these models this political year and in the future.

On Wednesday, I had the opportunity to finally meet Wilson in person (via online video) as we discussed the historic presidential primary election season and other political matters.  With his help, while the other candidates one after the other, fell aside, Cruz, remained as the last real credible candidate standing against the remarkable, yet rogue, reality TV star and international businessman, Donald Trump.

What was the secret of the Cruz’s campaign success?

Wilson credits Jeff Rowe, the campaign manager and of course, Ted Cruz, the candidate, of whom Wilson speaks so highly.  But, of course, he is also quite proud of how his team used the predictive models and data analytics to chart the rugged land mine-filled, political terrain.

Research, analytics, digital strategy, predictive models--sounds more like high-speed transportation to the next solar system, and in many ways, it is.

The new celestial system within the universe of politics now depends upon data, the analysis and projections.

The technologies and the processes enable candidates to gather information about a particular population, based upon certain demographics, interests, opinions and as a result--connect them with campaign persuasives, such as ads.

These statistical models, in many respects, because of the growth of information technologies and computerized infrastructures, are becoming an important, if not, an integral component to the election apparatus.

In many ways, they are as important as polls, but instead of just taking the temperature of a swath of the focus-group electorate, they are being used to connect the campaign message, the messenger with the members of the relevant group.

For example, one of the predictive models used in the Iowa Caucus looked at suburban women from age 25 to 48.  A main emotional-motivational  issue, believe it or not, was those universally-hated red light traffic cameras.  The Wilson-Cruz team used the predictive model enabling the campaign to target those suburban women, who were particularly annoyed by these intrusive cameras.   The targeting could occur on Facebook, through the door-to-door messaging, telephone calls, Google searches, and via other website placements.

In fact, in many ways, this industry is in its infancy making huge differences in one of the oldest professions in the world, elective politics.

In part due to the focus by the 2008 and 2012 Obama campaigns, and now, because of its powerful deployment by the Hillary Clinton campaign, the Democrats have the clear data advantage, but of course, Wilson nonetheless believes, his party holds the edge in ideas, principles and candidates.

In the interview, Wilson (who was once active in the Mike Foster campaign for Louisiana governor and most recently, Republican Jay Dardenne’s run for the state’s top office), described his first foray in putting these data projection models together for his candidates.

Fast forward, his third effort was the Ted Cruz for US Senate campaign.  Wilson said Cruz had been outspent 50 to 1, yet the Republican Texan prevailed, in part due to the 15 models deployed by the Wilson data team.

While Ted Cruz and the Romney teams used predictive models in election year 2012, those models were dwarfed in number and power by those utilized by Obama and the democrats.

After former Lt. Governor John Abbott engaged them in his winning bid to be the Governor of Texas, Wilson was hired to go in house to head the data team for Ted Cruz’s presidential run.

To help win the Iowa caucus, the Cruz campaign used 67 and on Super Tuesday the number had increased to 845.

As history has proven, not if you compete against a media and public relations phenomenon such as Donald Trump, who apparently used Trump power instead.

But, Wilson said, this has changed and Trump has put his toe into the data waters for the general session.  Yet, as of now, comparatively speaking, Trump has only entered the market being driven and heavily dominated by his opponent, Hillary Clinton.  Wilson believes Trump has a onnly couple of data scientists under contract compared to a hundred working under the Clinton tent.

Below is the video interview of Chris Wilson.  Make sure you check out tomorrow’s segment which focuses more upon the Cruz candidacy, Trump and other issues.

More in this category: « Trump demeans gun owners, 2nd Amendment not at risk Might Clinton's, dems' use of analytics trump the GOP, yielding barren win season »
back to top