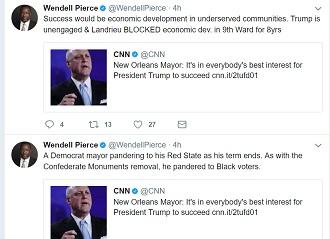 "I do think that politicians in this country have a special obligation to step up and to choose because I think reconciliation and finding common ground is a choice. It's not something that you can get forced into now," he continued. "And some guys think they win by separating. I think we win when we're together."

Shameless political panderer that he is, Landrieu pivots away from New Orleans to court the Trump supporters of Louisiana. Political science https://t.co/xgiHTBveMy

Based upon an article by the Lens, perhaps there was also a personal issue involved in Pierce’s anger stemming from a few years ago.

Henry and his business partner, actor Wendell Pierce, believe that Landrieu nixed a development plan in the Lower 9th Ward in 2011 that would have included a grocery store operated by their company, Sterling Farms.