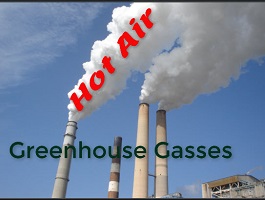 Perhaps one of the most important scientific-political debates occuring globally is the issue of climate change and global warming. Is man-made global warming a hoax? If not, what might be causing the warming? Greenhouse gasses?

Here is part one of the Facebook Live interview with Dr. Ward:

DR. WARD:  And in 2006 I discovered an an enigma about about climate that just didn't make any sense. Basically I discovered that in the Greenland ice cores, that at the same time that we came out of the last ice age when we were warming most rapidly was precisely the time when there were the most volcanic activity recorded in the Greenland ice cores and this suggested that volcanoes cause warming.

But I've been a volcanologist all my life and I know there's all volcanologists do the big explosive volcanoes cause cooling like Pinatubo in 1991. And I said wait a minute this just doesn't make sense. I've got to figure this out. And the more I looked into it the better the data looked it was pretty clear there was a real problem. So for the last 12 years I have put almost everything else inside my life and worked full time trying to understand this problem. It's led in a very interesting direction. It's very clear that the Globe has been warming but it's also clear and it's clear that man caused some of that warming but not because of greenhouse gases. And over all of earth's history-- volcanoes, certain types of volcanoes, major basaltic flows--coming out of volcanoes caused the warming and you could see this throughout all of earth's history.

SABLUDOWSKY:  Very interesting, so we're talking about volcanoes and we're talk about man and what are some of the other influences.

DR. WARD: Well in terms of causing warming what I've discovered is that the ozone layer which is 12 15 miles above earth protects us from ultraviolet light coming from the sun.

That's well known, well understood. ultraviolet light is dangerous damaging light that's what causes sunburn, causes skin cancer, can even cause mutations in cancer in a sufficient amount. It turns out that man accidentally started the depleting the ozone layer, back around 1970 because of producing chlorofluorocarbon gases CFC gases. When you deplete the ozone layer more ultraviolet B reaches the Earth than usual and this led to the warming of Earth. In 1986 when we discovered the Antarctic ozone hole we discovered the problem was a lot bigger than we had thought. And within two years scientists and political leaders at the U.N. came up with the Montreal Protocol restricting the production of the CFC's. This took effect in 1989. Sure enough, nineteen ninety three, the increase in CFC stopped, 1995 the increase in ozone depletion stopped. 1998 the increase in temperature stopped. So man had turned on global warming and stopped global warming but we still remain warm. The ozone layer still remains depleted which means we're still melting ice. We're still causing problems. Then it turns out the volcanoes when you have big basaltic lava flows like what we see in Hawaii but much much bigger, these cause warming. And the biggest ones are as large as the whole United States back around over 200 million years ago. So we're talking really big lava flows. These are very closely associated throughout geologic time. Every time you see one of these lava flows, it's a period of major warming and major mass extinction, so nature is causing changes in climate and man just happened to get into the Achilles heel of climate through this production of CFC's.

SABLUDOWSKY: So as I understand it there is a study am I correct that will be coming out soon about the climate changes?

DR. WARD: Well, I have a book. Why climate change is what really causes global warming. Greenhouse gases are ozone depletion. It's been a couple of years that's readily available on Amazon and on my Web site, whyclimatechanges.com  I've published several papers on this and the problem I'm having is that most scientists who believe very sincerely in greenhouse warming theory just can't conceive of the concept that that theory might be wrong.  And it turns out it is wrong and I can explain why what the physics is. It's a fundamental misunderstanding in physics. And so here we are at a point in time we're talking about spending trillions of dollars to reduce greenhouse gases. And  I have very clear scientific evidence that nobody has been able to dispute so far that man and nature are causing the warming by ozone depletion and the greenhouse gases cannot physically cause the warming.

Dr. Ward worked 27 years with the United States Geological Survey as research geophysicist, branch chief, and program manager. He helped develop and manage a major national research program, chaired a committee at the White House, testified before Congress, worked on a committee for Vice President Gore, published more than 50 scientific papers, and won two national awards for explaining science to the general public. He retired in 1998, working intensely for the past decade trying to resolve several enigmatic observations related to climate change.