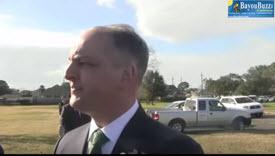 Louisiana Governor Jon Bel Edwards, in a short media "gaggle" held after an Gentilly neighborhood event talked with the media about the horrific Louisiana budget situation, his sales tax proposal, his knowledge of the budget severity, possible cuts to the Universities, David Vitter's absence from a Washington DC  Congressional delegation meeting and other subjects.

Below is the transcript and a video playlist of the entire presser:

First of all, we're calling it a bridge because it is a bridge to a new tax structure.  And once that structure is in place, the penny would go away. So, that's exactly the concept.Unfortunately, we believe that the penny is necessary, Because the budget problem is so big.  The revenue shortfall Is of historical proportions.

No governor has ever come into this office in the history of our state, with a deficit as large as we have --$750 million to close out the current fiscal year by June 30th. And, 1.9 billion for the fiscal year starting July 1st.   As a result were having to make some very tough decisions and as we transition to this new and better tax structures, so we don't have these annual revenue shortfalls, we can adequately fund our priorities. But we do have to have a bridge. Unfortunately, that's the reality. It's not something that I'm happy to do, I just know it's the right thing to do  and as leadership requires for me to take ownership of the problem and move forward.

Do you think that LSU is overreacting and putting in these catastrophic cuts and should they maybe wait until February 13 when the executive budget comes out, to then decide what cuts to make ?

I don't think they're overreacting because we know that--that executive budget is going to have $1.9 billion less than is required to continue the services next year for the same as this year.

And I want everybody to understand that the 1.9 billion, with a B--that does not factor in inflation, that does not factor in any merit raises for state employees, there's no additional (inaudible) for higher education, No additional (inaudible) for K-12 education . That's a $1.9 billion shortfall that we have to make up in order to grow government and so higher education is well aware that we already lead the nation the last eight years in terms of the disinvestment in higher education.  The state general fund was cut $700 million. They know what additional cuts are going to do to higher education in Louisiana. So I cannot say that they were overreacting. I think they're accurately looking at the future, if in fact the revenue is not increased, so that we can make the shortfall.

Governor, a number of people are saying that you should have known The major budget, the 1.9 and the 750 million, so, could you just give us a timeline, in terms of when did you know, how did you find out

I would just remind you that in November, the joint legislative committee on the budget met to consider a proposal by Gov. Jindal to eliminate the current midyear problem which at that point stood at $437M.  They did everything Governor Jindal asked them to do and today, we're sitting here with the 750 million dollar problem.  Which by the time the REC meets on  February 10,  We could be at $800 million dollars.  So, how i could have anticipated that, I don't know.  We all knew we had a problem in the next fiscal year.  I would just tell you that the problem is larger by the factor of at least two, then we knew about as recently as October and November. And while the price of oil certainly has exacerbated the impact on this, it is still, a relatively small part of the problem. We have had irresponsible and basically dishonest budgeting in our state for a number of years now and the roost, the chickens have come home to roost. This is just where we are.  we're not just going to continue on this path, we're going to do things about it.  By doing things better, there's going to be some short-term pain associated with this. There's no way around it. This is not the situation i wanted to step into.  Any governor would rather have a one billion dollar surplus to start off, rather than a 1.9B shortfall. But, we are where we are and we need (inaudible)

I know that one of the proposals, it to extend the tax already on the hotel rooms to online sites such as AirBnb, is that a fairness issue, asking hotels and tourist people to pay for that?

Well first of all, it's about fairness. It's also about revenues.  But, it is about fairness, because those taxes are being collected and remitted by people who are in the traditional hotel business and they're in competition against these other folks who are renting out their homes and other places but not collecting the remitted tax. So, it's about fairness, about leveling the playing field and obviously, it does bring in additional revenues too and that is important

Talk about coming home in that snow storm..

Well first of all, it was a challenge, we were able to find out the Charlotte's airport had an opportunity open late yesterday. We then had to figure out whether we could get there and with a little assistance from the Virginia State Troopers, we were able to get there just about dark and take on and get back to Baton Rouge last night. I will tell you, the folks were having a great time there  the Hilton Hotel in Washington, even as they were snowed in, but i was glad to be ready to leave, really because I was looking forward to being here in New Orleans today, to make this announcement.

You mentioned that you met with all the delegation, but one, David Vitter, being that one, any reason why he didn't make the meeting?

I will tell you, I got an email from Senator Vitter this morning and he told me it was a scheduling error in his office and that the scheduler had inadvertently received the invitation and the invitation came from Steve Scalise, by the way, Congressman Scalise, set up that meeting. and he had set up the meeting and they thought it was just one of the many invitations you get around the Washington DC Mardi Gras, and it did not receive the attention, he thought it should have and he told me that he personally has not seen it and so, he apologized for not making it, and he promised that, in the future, as I have, we're going to work together.

Could you tell us about the meeting with the LSU President, on Wednesday, right?

Well, it wasn't just with the President, it was with a number of folks, but we basically told them what i told you about the size of the budget problem for the rest of the fiscal year, what it looks like for the year going forward and we went through the timeline when the revenue estimating conference going to meet, when the executive budget proposal is due, when the special session is going to start and then into the regular session, so we just went through all of that and made sure that they understood where we are if we don't close the revenue gap and the impact that's going to have on higher education and so, i have not seen the communication, I suspect you are relating to in terms of what was the President of LSU has said.  I can only tell you that if he's saying it's a serious situation, he's right.

One last question, you know, i did some research yesterday and i determined that if we were to close all of the universities in Louisiana, all public universities, that would be $700M from the general fund of the $1.9 billion, so i'm just wondering is there any other mind-blowing numbers that we're looking at in terms of how we get to the budget, are we talking about maybe 50-50, 60-40, 70-30

Look, I'm going to tell you, I'm not going there.  We've been cutting the budget for seven straight years.  And so we are where we are.  So, I am proposing to the legislature, a plan that will make sure that we don't close our universities, so they really are state universities and not just state-aided, but they are actually state supported.  We can't do what you're talking about.  Just think about a 25% cut, that's $500 million dollars next year.  And anybody proposes that we enact the 25% cut needs to say where the $500 million is going to come from and look at the impact that-that's going invariably have on higher education.

More in this category: « Treasurer John Kennedy hopes 3rd run for U.S. Senate will be charm GULP! Hold your nannies, a Bloomberg presidential run coming near you »
back to top