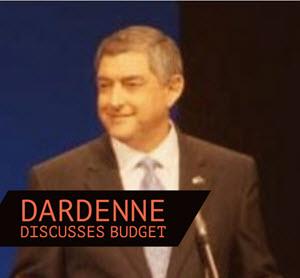 Why did  Democrat John Bel Edwards and Jay Dardenne suddenly start their transition team and the first year of their administration, by trying to raise taxes, especially when, throughout the campaign, none of the candidates advocated doing so?

As soon as December of last year and especially going into January and the weeks following, both men were criticized by the Republican Party, conservative bloggers and others for "lying" and for "breaking their promises" regarding taxes.  In fact, the Governor, Edwards, was forever slammed for defying his West Point Honor Code--of always telling the truth.  Edwards had made honesty a major issue in his hotly contested gubernatorial campaign against David Vitter.

On Thursday, via recorded phone interview, I discussed these and other issues with Dardenne, the Republican Commissioner of Administration, including budget comments made by Treasurer John Kennedy.

Below is the transcript and a video of the recorded audio interview of Part I of the interview with Dardenne.  Part 2, focusing upon government contracts and other issues will be published Monday.

SABLUDOWSKY: I will ask you some questions real quick about some things that have really been puzzling me over the last year. Things that I have written about and I figured that you would be the prime person to respond

SABLUDOWSKY:  How about it

SABLUDOWSKY: Basically, as you know, I was very involved in covering and reading about what was going on in terms of last year's election, and leading up to putting the administration together, and one of the things, I guess, that really puzzled and bothered me--that there were people who were saying that the Edwards administration is not telling the truth, they knew how bad things were, before they actually took over, way back in the fall of last year--they said they weren't going to raise taxes and right away, they did so. It has always been my opinion that nobody really knew how bad things were but nobody really knew how bad things were until December and January when you were able to get into the books and get more information, so maybe you can help me with that issue alone, that particular issue.

DARDENNE: Steve, your evaluation is exactly correct. I mean, my memory is very vivid about the discussions we had regarding the state budget during the campaign, and I think all of us who were candidates, I know I, and John Bel were both talking about a potential 700 million problem, six to $700 million problem--based upon the numbers that had been bandied about last year during the campaign.   When John Bel won, and he asked me to get involved as Commissioner of Administration, I came on board, officially in December, and in mid to late December started going the books and finding out that things were a lot worse than anything that anybody had ever thought. Not only because there was a revenue estimating conference that took place around that time they told us for the first time that we had some serious problems in the then-current fiscal year (2015-2016) and concerns about the next fiscal year (2016-2017) but also because what I was uncovering in my role as Commissioner and looking at what has been done during the Jindal administration to basically hide some expense and not plan for expenses that the administration absolutely knew that were going to be incurred. And all that resulted in what became, literally, a $2 billion problem going into fiscal year 17. As we got into the current calendar year which was still part of the previous fiscal year, no one was really refuting the problems that we were talking about and we were saying now existed. Everyone, all the economists and all of the staffs of the house and senate and the legislature as a whole, legislative budget office, fiscal office, rather, our budget office were all acknowledging that these numbers were very real.  So, you are correct in what you had said that we did not know the breadth and depth and scope of the financial problem, during the campaign. We knew that there were problems out there, we knew that there were problems on the horizon, but we had no idea of the magnitude of the shortfall until after the election was over, and we got in here and started realizing the problem.

SABLUDOWSKY: Now, obviously the revenue estimating committee had determined the budget was I think 2.6 billion short, 750 million and 1.9

DARDENNE: I don't think the number was quite that large because part of the problem was a shortage in revenue coming in but also a healthy list of expenditures to which the legislature had committed but simply, the money was not there to do it. So, it was a combination of a shortfall in revenue as well as expenditures that had not been properly budgeted. The total came to about 2 billion for the FYI 17 for the year that just began on July 1.

SABLUDOWSKY: And about 750 million, am I correct?  For last year..

DARDENNE: That's right. That was the number that we were facing last year that ballooned to about a billion before the start of the first special session because of revenue shortfalls.

SABLUDOWSKY: . Right. Right.  Now one of the people, one of the persons or individuals that had a different opinion from you and the governor and apparently the legislature was our treasurer, John Kennedy. Now, when I talked to him, I can tell you it was on January 27th, and that was after the revenue estimating committee came back with the 1.9 and the 750 million.  I asked him about how bad things were because he was saying that we didn't have to raise any revenues, it wasn't revenue issue, it wasn't a tax issue, it was an expense issue. So what he said to me and I put this up on Bayou Buzz, he said:  "I don't think it's one point nine billion  and I don't think it's 750 million.  I think the numbers are inflated,  I think that 1.9..I'm not saying it's not serious, but I don't think is 1.9 billion  and I don't think it's 750 million.  I think it's more like 1.2, 1.3 billion and more like 2, to 3-400 million this year if that  much. "

SABLUDOWSKY: So, you talking maybe about 50% difference, so Kennedy is saying in his opinion, as treasurer, the shortfall is, and I'm just going to average it, roughly, instead of 750--it's two, three or four. Instead of 1.9, it's 1.2, 1.3 to maybe 50% difference.  I mean, how can his numbers be so different from yours and the legislature, because they ended up raising taxes?

DARDENNE: You'll have to ask him, but his numbers were purely and simply, were wrong.  And proven to be wrong by what the revenue estimating conference had set as the revenue for the state, what the budget office, what the Senate staff, the house staff, our staff in the office of planning and budget, the legislative fiscal office--all recognized that these numbers were real. They weren't made up, they were the actual numbers, and John says what he wants to say, but, it simply wasn't correct. Nobody else bore that out. You have to ask him why he stuck by those numbers and obviously he's running for office and is campaigning and most of his rhetoric is politically driven.

SABLUDOWSKY: Okay, now, and it seems to me, and I agree, and I said that publicly, but it seems to me, that when he saying that we don't have to raise revenues, that what he's doing is--he's cutting the rug under those Republicans who actually raised revenues who were being blasted.

DARDENNE: Well as I say, politics is entwined in everything that happens down here obviously.  And we made it very clear from the beginning of this administration that we were going to be telling people the truth and that we were going to layout the real numbers, and we were going to make proposals for people to consider and invite them to offer alternative proposals throughout the three sessions with had this year, they have not been in viable alternative proposals that have been out there. Sure there's been some proposals but they were based on money that didn't exist or they were based on unconstitutional ways to try to say we didn't need to try to generate any revenue. And all those were eventually shut down by the legislature, which recognized that the numbers were talking about were real and the legislature did what it had to do to avoid a complete melt down frankly, where we would be in government. It wasn't easy, and the governor didn't want to come in with both guns blazing to raise taxes.  And, the legislature didn't get elected saying let me go down there and raise your taxes, but the reality was, we've been living in a fantasy world. For eight years--spending down every possible reserve fund that was available and using one-time money to balance the budgets, sweeping all of these various funds to give everybody a false comfort level that things were just rocking along very nicely. And they weren't. We were digging ourselves in a hole that we had to get out of--and our mission was to stabilize this budget, first and foremost, which would've done.  Our next mission is to have a very serious discussion about reforming our tax situation, to make some fundamental changes that will put us on a more stable ground, going forward