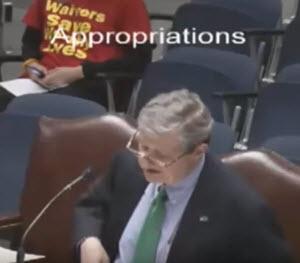 If you've been anywhere in Louisiana this year, watching TV news or listening to talk radio, you might have heard Treasurer John Kennedy discuss the 19,000-20,000 contracts (or so) that one might think are kicking the state, right in the groin.

To his credit, Kennedy, has sparked interest in the state contracting-letting procedure and potential waste. In his numerous interviews this year, the Treasurer and current US Senate candidate, has gone on record making it appear that the Governor is inflating the budget crises so he can raise taxes.  More particularly, Kennedy has repeatedly claimed that John Bel Edwards administration, and particularly, Commissioner of Administration Jay Dardenne, would be handling the contract review process in such a way that would essentially prevent Dardenne from doing any other business during the next four years.  In so many words, Kennedy depicted Dardenne sitting at his desk, reviewing these contracts until the four-year term expires.

I first heard the Treasurer make this allegation when both he and Dardenne appeared on WWL radio on February 23.  In slamming the governor, Kennedy said, “Here's my perspective Tommy, if the governor were seriously committed to getting rid of contracts, he wouldn't ask Jay, time is short, to read and review all 20,000 of them.

Kennedy then went on to give the listening audience his own ideas how to cut the contracts.

Moments later, Kennedy said, “I think by, I mean no disrespect, I think by funneling all these contracts through Jay, the Governor, is ensuring that there won't be any savings before his tax vote.

Roughly seven minutes and fifteen seconds into the interview, Dardenne responded to set the record straight.  He said, “The governor ordered every department, every department that I've met with in evaluating the budget, we've said look at your contracts, and bring us contracts, that we can either eliminate or that we can reduce. And that process is underway. We're on the same side of this issue, it just shouldn't be politicized because we’re trying to do the right thing and will going to do the right thing”.

However, later, even after Dardenne debunked Kennedy’s false rendition that Dardenne would sift through all of the contracts himself, Kennedy once again said, the governor “doesn’t need everybody to report to Jay and make Jay review 19,000 contracts when he has other things to do”.

Yep.  Dardenne told the world on WWL radio, that his Secretaries/agency heads would go through the contracts first and identify those contracts that the administration could eliminate and reduce and then report back to him with those specific contracts.  He certainly was not going to personally review for the next four years 19,000 contracts, as Kennedy claimed.  Yet, over the next few weeks, Kennedy ignored reality and propagated the contract-processing falsehood.

Honestly, I had been in utter disbelief whenever I heard Kennedy make the same claims, over and over, during  what seemed to be his frequent TV and radio appearances.

Even worse, I was simply flabbergasted when I heard Kennedy repeat this charade, presumably under oath, during the a legislative hearing, weeks later, on March 17.

In front of the legislators, in his testimony, Kennedy went into even more details, but saying the same nonsense, he had been spouting to the media.  Specifically, Kennedy said, “This is the procedure they have chosen: contact every department in state government, tell those departments to send copies of their contracts, contracts presumably that they know about because they've let them--to the Commissioner of Administration, He's supposed to read all of them, as he reads one that piques his interest, he's got to call the agency, arrange a meeting for them to come over and explain it, they're going to argue with him, and that's the way he's going to reduce these 19,000. I can assure you that he's going to be reading these contracts at the end of the governor first-term. He will never finish. That is not a reasonable approach”.

Double Yep.  Despite what Dardenne clearly told the WWL audience, Kennedy must have wanted all to believe something totally different.

After the hearing, in citing the ridiculous caricature Kennedy was presenting of Dardenne stationed at his desk reviewing contract after contract, I wrote an article about what I saw and created a video of Kennedy’s hearing statement and compared it to Dardenne’s prior own prior WWL radio comments. Last week, as part of a longer interview about the budget, I asked Dardenne to explain the contract process and to provide an update.

Listen to the interview by clicking on the video and here is Dardenne’s interview:

SABLUDOWSKY: Okay, one last question about the criticisms that the treasurer had you and the administration and then I would like to talk about the session itself, about the contracts. I mean, obviously, and thankfully he did recognize that we have contracts--I think he said 19,000 contracts and criticized your procedure. If you remember, you did a WWL radio discussion with him and he said this throughout the spring, that you're going to read every contract and pick out those that pique your interest and then talk to the different administration heads and that you'll be busy until for the rest of the four years. Is that what you said and what are you doing about the contracts?

DARDENNE: We came into this job saying that we need to look at state contracts.  We had too many, we need to ratchet the number down. We need to scrutinize how many are actually necessary... we were in a situation in the state where we literally did not know how many state contracts we had. We know now. In fact I reported to the legislature in the waning days of the second special session, a very extensive report on what our folks had done during the time we were here. You've got to recognize that we have lots of irons in the fire with all the sessions in the budget problems and everything else. We had two very capable people meeting a group of people that were looking at contracts and identifying what we’re doing.

We know, at least, we knew at that point in time, it changes almost every day--on May 27, 2016 we had 15,023 state contracts. That includes all the contracts that are overseen by the Division of Administration which I run. It does not include all the contracts for example, higher education in a couple of other areas because the legislature by its action has taken them out from under our purview. So we can only talk to the ones that we oversee. As a result of the budget cuts that were put in place since this administration began, there have been hundreds of millions of dollars in cuts. Many departments have reduced or eliminated contracts that they had and we directed them, the governor through an executive order directing his cabinet to identify contracts and to take steps to reduce or eliminate those that could be deemed nonessential to provide services that had to be performed by those respective departments or agencies. This is going to be an ongoing effort by us to continue to look closely at our contract situation. And the numbers have gone down dramatically. I just might add, over the course of the past 10 years--after Katrina there were a huge number of contracts and into the 20s, 20s thousands number. It's down to 15 somewhat thousand now, it's going to continue to shrink and it's something that with recognized as an issue for the state.

We also have to recognize that the state employees have been cut dramatically. Normally 30,000 or so state employee reduction over the course of the Jindal years--much of that resulting from the closing of the charity hospitals system. We have an awful lot less people performing services that people expect to be performed by government. And that means people having to do more, that some agencies are having to look to outside providers to do services that are out there. The other big take away from the contract discussion that the 50 or so largest contracts that the state has and they are mega bucks, they are big bucks, are with outside third parties to, for a group benefits program. Contracts with physicians who provide Medicaid services. Virtually everything in state government is done by contract when third parties are involved. They're either cooperative
endeavor agreements or their personal service contracts or what have you. We're looking at all those contracts and will looking to reduce them or eliminate them wherever possible.

SABLUDOWSKY: So you have other things to do other than sit at your desk and review every one of those contracts

DARDENNE: That's not something I've done and that is not something I'm personally going to do. What was saying to the department heads, the people who run the various departments and agencies of government--that's your responsibility to manage your budget and to review these contracts and to determine which ones are not necessary to establish for us which ones, which ones are. And over the course of the next several months and will begin to developing the fiscal year ‘18 budget starting in November but the dog days here of summer and as we get into the fall with no legislative sessions to occupy our time, this is one of the areas that will going to be focused on, is the number of state contracts--and meeting with department heads and say to them--tell us what you are doing to look at your contract situation, which ones are you reducing, which ones are you eliminating and that's going to be an ongoing exercise for us as we develop the next fiscal year budget.