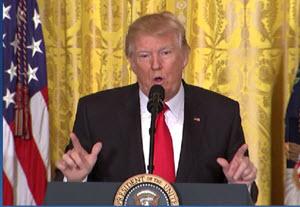 The media smells blood in the Potomac River. They sense the President they hate could be removed from office. Never mind that he won a landslide, winning electoral votes in 31 states. The media hates the President’s agenda and they hate that he defied their wishes and expectations by winning last November.

What has happened since his election is the equivalent of an attempted media coup d’état. According to the Media Research Center (MRC), 89% of the coverage of President Trump by the network news programs of CBS, NBC and ABC has been negative. According to the MRC’s Rich Noyes, “the elite liberal media do not think that Donald Trump is worthy of being president. They don’t like his policies. They don’t like his character.”

Over the past week, this negative coverage has become even more intense and taken on a disturbing dimension. The MRC studied an entire day of CNN’s reporting on the firing of FBI Director James Comey last Friday. During the day, the network featured 116 guests, but only 7, just 6%, could be identified as pro-Trump. The rest of the time, the network was bashing the President. Despite a host of other news stories, CNN spent 92% of its air time on Trump stories with the vast majority of the reporting being downright hostile.

In the last two days, liberal media outlets, Washington Post andNew York Times, have released supposedly damaging information regarding the President. The first story, released on Monday by the Washington Post, alleged that the President divulged classified information with the Russian Foreign Minister in a White House meeting. This has been denied by General H.R. McMaster, the National Security Adviser, and by Russian President Vladimir Putin. In addition, the President can release any information he deems necessary and is not violating any laws. In contrast, Hillary Clinton mishandled reams of classified materials through her unsecure email server, but was never held to account.

On Tuesday, the New York Times reported that fired FBI Director James Comey kept detailed records of his meetings with President Trump. Reportedly, in one meeting, the President said to Comey that he “hoped” that the FBI would drop their investigation into fired National Security Adviser General Michael Flynn. Congressional Democrats and even some Republicans are now claiming “obstruction of justice,” discussing Watergate, the need for special prosecutors and even impeachment.

This type of fantasy talk is being fueled by the leftist media, who desperately want to drive President Trump from office. The same media that acted like lap dogs during the Obama administration have now turned into vicious, rabies infested, attack dogs. The media is not playing its’ historic roles of trying to keep the President honest. Instead, they are working day and night to overthrow a duly elected Commander-in-chief.

The media was able to run President Richard Nixon from office and they hate Donald Trump much more. While Barack Obama was treated like a king, Donald Trump is treated like a criminal. In the process, the media is overlooking major stories such as Susan Rice’s role in unmasking members of the Trump campaign and the criminal leaking of General Flynn’s name to the media. They are also ignoring the latest bombshell involving former DNC staffer Seth Rich, who was murdered in Washington D.C. His case remains unsolved, but an investigator hired by the Rich family has uncovered a huge collection of emails from Rich to WikiLeaks, the organization that released the embarrassing DNC emails. While the media and the Democrats constantly allege “Russian collusion” in the election to help Donald Trump and maintain that “Russians” hacked the email account, WikiLeaks asserts that it was not the Russians. In fact, the source could have been Rich and maybe that is why he was killed.

This potentially juicy story has been spiked by the mainstream news media so they can constantly opine about Trump scandals, impeachment, Watergate, James Comey, etc. Another day, another Trump scandal, but in the case of the “bombshell” Comey memo, the media is running the story even though they have not seen the memo.

While this diversion is happening, The President’s accomplishments are being ignored as the mainstream news media is working overtime to takedown a legitimately elected President. In the process, objective journalism is now officially dead.

In response to this media feeding frenzy, the President needs to eliminate the press briefings. It is time to treat the media as the enemy they are. The media does not care about the President’s domestic or foreign policy achievements. All they care to do is to perpetuate the so-called Russian collusion story.

The current frenzy is quite scary and could have a damaging impact on the country’s financial markets and standing overseas. Already, the stock market has lost over 250 points this morning and the value of the dollar is falling.

At this point, the American people must realize that the media has lost any semblance of balance. It could be why a new poll shows that members of the media are less trusted than used car salesmen.

The only outlets that give the President any semblance of a fair shake are Fox News, talk radio and select Internet sites. From now on, the President needs to stop giving interviews to the mainstream news outlets. No more exclusive interviews for liberal hacks like Lester Holt of NBC or John Dickerson of CBS. The members of the Trump administration should boycott those shows as well and only give interviews to fair and balanced programs, which are few and far between.

The President needs a more aggressive communication staff that responds quickly and vigorously to false media stories. Clearly, he needs a new Press Secretary with a new outlook. In the meantime, the President’s staff is sabotaging his agenda, so he is not being well served. Overall, his positive works are being overwhelmed by media distractions and internal leaks.

In the midst of this media firestorm, it is a battle for the survival of the Trump administration and his reform agenda. The media, political establishment, and bureaucratic deep state will stop at nothing to derail the Trump administration. Moving forward, the President must understand the stakes and have competent people on his team for the many pitched battles ahead.

More in this category: « Quin Hillyer: "Mitch Landrieu lower than cow dung" for Beauregard Statue removal in New Orleans Trump's incompetent, should not be President says conservative columnist Quin Hillyer »
back to top