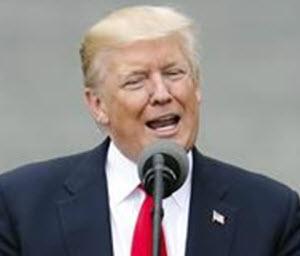 There is a religious dimension in the struggle between Trump and Comey. Lies are so inherently a part of human frailty; ever since the Garden of Eden, that God felt compelled to kibosh them in stone. Jesus described himself, in John 14, as “the way, the truth, and the life.” We’re seeing one titanic morality play of good-versus-not-good that’s set in our own lifetimes, ones in which faith is hard challenged by economics and the “virtue of selfishness,” as Bertrand Russell used to call it.

There’s hope. The bad guys never win in Marvel Comics; Voldemort and the Death Eaters lose to Dumbledore’s Army of kids; and, Rudy gets to play for Notre Dame. Americans can only be messed with for so long. As a people we’re patient, but not stupid. When the story of Trump and Comey is written down it won’t be fake news, it’ll be history in which we each had a personal stake. Where we stand is meaningful.

Trump has forced people to ratchet down their tolerances, over, and over, again. He must know, at least, that you can only tell people it’s “your way or the highway” so many times before they, finally, hit the road leaving you with a mirror for company. If he’s clueless, someone should tell the President that as an act of charity.

Trump vs. Comey is set for pay-per-view on HBO, streaming from Caesar’s Palace. Only the very best people are coming to see the fight, sip Veuve Clicquot, and munch on crackers spread with Sevruga. More people will watch, from home, than saw the royals Wills and Kate promise it up at Westminster Abbey. Extra-terrestrials are planning to pirate the signal.

Whence came this drama? Donald J. Trump refused to lie in the weeds until something devilishly more clownish came tweet, tweet, tweeting along to distract the world from James Comey. Instead of waiting to see if Special Counsel Robert Mueller’s investigation would last as long as the Rule Against Perpetuities, Trump finger-painted a messy story with the urgency of a kindergartener. In it, he flips off Jimmy Stewart, Gregory Peck, and James Bond, all without a second thought.

Trump ignored his lawyers, press agents, staff, allies, and cheering fans to become the first law and order President to push a piece of big, beautiful, chocolate cake in the face of America’s top cop. What are parents telling their children this time? When does loyalty turn into anarchy? What does truth mean in a world imprisoned in towers of babble that flies as fast as light? How much compromise can a public accept? These are questions deserving of answers, the absence of which may be harmful to our big, beautiful planet.