Louisiana Treasurer Race: Derrick Edwards does have Chinaman's chance to beat Schroder, IF 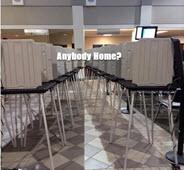 Does Derrick Edwards have a Chinaman’s chance of winning the Louisiana Treasurer’s race?

Conventional wisdom says, no way. Not a Chinaman, not an Englishman, only, a “no-way man” chance of prevailing.

The top Louisiana politicos and pollsters in Louisiana pretty much agree.

In a series of online Facebook Live interviews, post-election, with Dr. Ed Chervenak, Bernie Pinsonat, Jeff Crouere, Jim Brown, John Couvillon, none of them have felt there was any possible scenario to victory.

I likewise have noted that on a good day, with the full support of the Louisiana Democratic Party and plenty of campaign cash, Democrats have not been able to beat Republicans but for that one unique exception—John Bel Edwards vs. David Vitter.  Thus, how could anybody really back a Derrick Edwards victory narrative, especially given the fact that he is an unknown political commodity and the Democratic Party itself has failed to promote his candidacy?

Here’s what Pinsonat had to say this week during our Facebook Live interview:

He got the majority of-- look the Democratic Party is on the verge of being--I have a lot of whites and you get a lot of whites in it, but they don't vote Democratic anymore they just don't bother to change their party.  So the bottom line is if you look at Derrick Edwards or any other Democrat, you look at Mary Landrieu, you look at Foster Campbell, you look at Clinton-Landrieu whoever you look at they--get about 41-42 percent of the vote statewide which eighty percent of that is primarily African American voters and they're getting very little whites.  Which is remarkable because when you have about thirty percent of the state vote, it's black you don't need a lot of whites, but it's so bad in Louisiana they can't give a 20 25 percent of the whites to vote and Democrats--so they don't win statewide elections anymore.  And sure, he's going to be--but remember you had two you had three white Republicans who were splitting the white vote and he got primarily just about all of his voters from African Americans, so that's that's what all races and then what happens is the--the candidate is generally the most far right runs against the candidate who's the most most democratic and that's what runoffs and always going to look like with, in effect, all of them basically with with few exceptions, turning out to be winners for the Republicans and statewide races.

In essence, the point made—not enough white Democrats or whites, in general, are voting for the blues and the Democratic Party candidate voting tally is made up by roughly 80 percent African American vote, who make up approximately 30 percent of the Louisiana electorate.

Yet, looking at potential numbers, perhaps, there is an outside possibility, that maybe, just maybe, Edwards might pull the upset of all Louisiana political upsets.

How?  Here’s the possible scenario--whites do not vote because they would have a false sense of confidence that their vote doesn’t matter or that simply complacency has set into the Pachyderms’ bones.

Essentially, Orleans Parish is the only venue with any real activity, this November 18. There is the growing “hot” New Orleans Mayor’s race and two council seats being contested. Otherwise, in almost elsewhere in Louisiana, there really is no reason to go to the polls to vote.  Thus, the question comes down to this for many whites in Louisiana, even Republicans—“why should I vote, especially for a seat that, well and, uh, what does the Treasurer actually do”?

The response: “Well, there is the Bond Commission and his being the keeper of the money and his market investing and of course, the Unclaimed Property and, well, let’s go hunting and, and, um, what time does that game come on today?”

The operative issue, therefore, is turnout.

Let’s stroll down memory lane: In 2015, current Republican US Senator John Kennedy won his last Louisiana Treasurer’s race with 80 percent of the vote and a turnout of 983,468 voters.  The turnout for that race was significantly aided by the very fact that on the ballot was the run for Governor, an intense emotional John Bel Edwards vs. David Vitter matchup.

Now, compare those numbers to the recent primary election:  Exactly, a whopping 401,499 voters cast their votes. This amounted to, get this, 40.8 percent of the 2015 Treasurer’s race where Kennedy was an absolute certainty.

Now, with far less candidates running for political office a few Saturday’s from now, with only New Orleans featuring anything close to a showdown, the overall turnout for the November 18 election could fall way below the incredibly paltry 13.5% statewide attendance in voting booths, earlier this month.

Sure, should Orleans Parish seem to get a strong early turnout which might appear to show that Edwards might score, then, the white and republican voters might come out to back Schroder.

Not that Schroder won’t be hitting the airwaves as he dominated in his run against two Republicans, Senator Neil Riser and Angele Davis.  I imagine a subtle reminder in the ads that Schroder is a Republican, the other guy is a Democrat,.  That type of “vote for me” could be just as effective as Democrats backing Edwards because of the “D” next to his name.

Edwards also might get more support this time around with the Democratic Party formally getting behind him.

And as Jim Brown mentioned in a Facebook Live discussion this week, Louisiana Governor John Bel Edwards better go out for the other Democrat or else, he will have a price to pay two years from now when he runs for re-election.

So, who knows?  if the stars align with the moon and the sun, and if there’s a perfect storm, and if the Orleans Parish election heats up more (as it appears to be doing) resulting in greater New Orleans turnout--there might be a chance that a deflated turnout statewide and a relatively stronger  turnout in the Big Easy, could prove hazardous to the Schroder campaign’s health.

And certainly, it would be helpful to Edwards if the LSU Tennessee game at 12 noon draws keen interest around the state, or, if whites, in general, forget or decide not to vote.

For now, those are a lot of ifs.

And, Edwards needs votes, no ifs, ands or buts