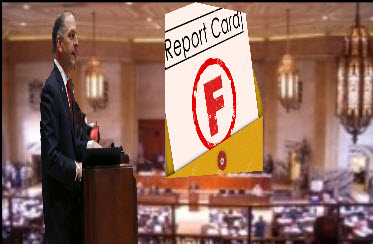 Once again, a special legislative session ended in disaster for the taxpayers of Louisiana. During the administration of Governor John Bel Edwards, there have been five special sessions, each one costing taxpayers approximately $1 million. For a state that is supposedly facing a “fiscal cliff,” it is outrageous that we have wasted $5 million on special sessions.

These sessions were all called by Governor Edwards, even though legislators spend months in regular sessions in Baton Rouge. In this case, absolutely nothing was passed and the session ended in total failure, mostly due to the incompetence and lack of leadership of Governor Edwards.

The Governor called this session to deal with the supposed $1 billion budget deficit. In reality, the deficit is only $692 million due to the extra revenue that will be generated by the new federal tax legislation passed in December. He should have never called the session if he did not have the support to pass a legislative package to balance the budget.

The real goal of the Governor and Democrats was to pass higher income taxes. If nothing passed, he threatened to cut the TOPS program, along with higher education and health care. Sadly, the Governor expressed no willingness to cut spending in a myriad of other areas. For example, as U.S. Senator John Kennedy (R-LA) has indicated, the Governor and his allies scuttled four Medicaid reform proposals. These bills would have created work requirements for some recipients, co-payments and premiums and new procedures to verify eligibility.

While Republicans offered an extension of ¼ of the penny sales tax increase, the Governor was unable to generate much support for the measure among the Democrats in the legislature. Consequently, a session that should have never been called in the first place, ended in total failure.

What this session established was that Governor Edwards has no leadership abilities. He was unable to bring together Republican and Democratic Party leaders to forge a compromise.

Since the days of Huey Long and Edwin Edwards, when Louisiana was led by a Governor with near total power, legislators have become more independent and gained more control over their own affairs. After Edwards was elected, they even defied his wishes and elected their own Speaker of the House. These were positive developments, but Governor Edwards retained plenty of power.

In this special session, Governor had plenty of tools at his disposal to sway legislators. Unfortunately, he was unable to solve this problem and bring about a legislative consensus; therefore, this huge problem remains unsolved.

The next step is for legislators to report to the beginning of the regular session on March 12. In this session, they will not be able to raise taxes, so they will need another special session to balance the budget.

If the regular session does not end early, another special session will have to be called, costing taxpayers another $1 million. It will just be another sign that Governor John Bel Edwards is a failure and another reason for the voters of Louisiana to deny him another term when he runs for re-election next year.