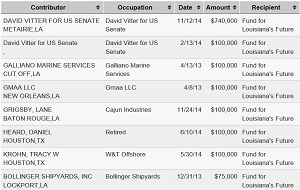 On Tuesday, the Louisiana Governor’s race has officially started with a snap.  The top issue is whether any candidate can beat US Senator David Vitter who is the prohibitive front-runner.

There are various polls that take a snapshot in time that indicate that Vitter and Democrat Jon Bel Edwards are neck-and-neck indicating a runoff.  According to all of those polls, the result would likely produce a runoff Vitter victory in November, rather than a general election romp in October.

There are a smattering of other polls that claim that Scott Angelle might compete with Vitter for the top republican spot in a runoff with Edwards, at this point, the lone Democrat to qualify.

There are likewise indications that the polls that have run to date are simply irrelevant for a number of reasons:  As an LSU survey pointed out weeks ago, the public doesn’t seem to care right now, so, the surveys aren’t worth a grain of salt.   Also, and perhaps more importantly, the David Vitter campaign, and his Super PAC, Fund for Louisiana Future, have and will continue to possess more money to spend on ads and other political services than all of the other candidates and PACS combined.   Although all of the candidates so far have preserved their campaign funds to now--when the voting public just might give a darn--the campaign donor equations still favors Vitter, by a sizeable skew.

Vitter and his Super PAC not only command the media market--so he can get their collective messages out to the public, but, they have the campaign infrastructures in place of which most candidates would trade their first-borns to own.  His Facebook page sports over 132,000 fans.  His twitter account is now up to over 31,000.  Two of his last three Youtube videos have earned over 47,000 views.

Not that social media and related numbers are the test for success, but, in the era of quick responses that can speed out into the blatherscape faster and further than ever before, these numbers matter tremendously.  Add these figures along with an incredible email list (including the lists of the dozens of top republicans who support the Senator and who will deploy their own digital assets to prove their loyalty), the combustion of digital political information makes TV ads fade like the Edsel.

It is difficult to visit a webpage without seeing a Vitter ad enticing one to learn more about his platform and plans for the future.

Compare 2015 to five years ago when Vitter handily beat Democrat Charlie Melancon.  Back then, other than the candidates’ own campaigns, no other entities existed other than the Republican and Democratic Parties who acted as campaign proxies.  Today, thanks to the fast-expanding growth of 3rd-party groups, there are many others voices and actors out there with the money and the presence, that matter.

Vitter’s SuperPAC is flush with dough from major donors such as Lane Grigsby (at least $150,000), Galliano Marine Services (at least $100,000) and Bollinger Shipyards Inc. (at least $125,000) kicking in some chump change.  Vitter’s US Senate campaign has contributed at least $890,000 to the PAC which money will be used to promote Vitter and attack his opponents.  Only two years ago, before Vitter’s PAC won a local federal court decision, a federal campaign, such as his US Senate organization, could not contribute to a Louisiana state campaign, such as his own.  Now that Citizens United is the law of the land, the once powerful state political parties do have some sway, but, not much more.

Other than TV ads, where might some of the Grigsby-Galliano-Bollinger cash be going as Vitter machine beefs up its presence in the state?

One constant distribution of those resources appears to be in the form of “opposition research” in the amount of $8000 per month—month, after month, to America Rising PAC.  Anybody attending a governor’s forum or checking out the campaign trail will likely see a young man named Josh holding camera on top of pole, shooting video of Vitter’s opponents as they talk privately to the unknowing public.

Of course, how these videos ended up being pushed by the Vitter campaign team given that these new funny-money PACS are supposed to be operating independently and free of coordination with the candidates’ campaigns, is a question the public likely will never get answered.

And, speaking of campaign videos, a new player has emerged, right in time for candidates qualifying.

A new organization strangely called “Louisiana Water Commission PAC” has hit the web fomenting the Vitter-past.  According to LaPolitics.com’s sources, the organization media spend could hover around one-million-dollars.  The goal?  An obvious one--remind the world that David Vitter has a history he would like everyone to forget.  The website http://betterthanvitter.com currently includes videos recycled from an election in which the “ladies-of-the-night” issue was first vetted, and failed.   However, the difference this time around might be that republicans are attacking Vitter, not just pro-Obama democrats that Vitter made mince-meat in 2010.

While the organization likely hopes the second-time is the charm, Vitter’s supporters are sure to chime, been there, seen that.  The impact of this new effort probably lies somewhere in the middle.  True, the scandal emerged eight years ago and Louisiana voters no longer appear to be bothered with matters of family values. Plus, the controversy is now dated.  When it first erupted, candidate  Bobby Jindal’s promise of reform was the GOP’s answer to Louisiana’s sorry ethics history.  That one fact should tell you how people’s fortunes and futures can change over time, sometimes for better and sometimes for worse.

Remember Vitter might have messed up and messed around but he still is one wise dude.  A few minutes ago, his campaign unleashed its response blaming the new attack site on the traditional republican whipping boy, those “liberal trial lawyers”.  In an email blast, Vitter states, “Today a small but well-funded group of liberal trial lawyers started running a vicious, gutter campaign against me full of stale attacks. They're actively working for my opponents and launching a gutter attack campaign for them.”

Towards the end of his written response with, “Just five years ago, Charlie Melancon and his fellow Obama allies ran the exact same type of no-solutions attack campaign. In fact, the ads were almost exactly the same.  We didn’t back down to the liberal attack dogs then.  Instead, we won overwhelmingly, 57% to 38%.

And we'll do it again--for Louisiana.”

At the bottom of the e-blast is a link to his site where visitors can volunteer by joining his campaign, adding to his email, facebook, twitter lists and even allowing one to host a fundraiser for the Senator.

Team Vitter is no dummy.  No dummy.