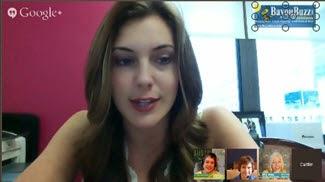 In the second part of the Miss USA Google Hangout (first part here), the focus shifted from Erin Brady's upbringing to her more recent experiences during the beauty pageants in 2013. Brady talked about the support she received from the other contestants, her homecoming experience in Connecticut, and how it felt to be among ninety Misses from all over the world in the Miss Universe contest.

Brady: During the pageant itself, during this past year, or both?

Brady: I would say the biggest moment during the actual competition was when I was standing with Miss Alabama when it was just the two of us, and one of us was going to become the winner. To my left stood all of the other 48 contestants. They were chanting "Connecticut, Connecticut, Connecticut!" Even if I hadn't won, to me, the fact that these girls who were my competition for two weeks were so supportive and were so excited that if I was going to be the winner, they were genuinely from the bottom of their hearts happy for me, made it. After the kind of...it's a very competitive atmosphere for two weeks. The fact that I was the same girl when I walked in as when I was leaving, and all of those women were able to see that. That genuineness that I have about myself..it was amazing. Even people from the outside said, "Erin. When the girls got eliminated, they ran around to the back and they were watching and saying 'Connecticut, Connecticut, Connecticut!'" I don't know. I think that's really cool. At least if you're not going to win, you want to be happy for the girl that does win and hope that they represent your class well. I'm glad that they felt that way.

Sabludowsky: So now you can come down to Baton Rouge and say, "Louisiana, Louisiana." What was your biggest moment since?

Brady: I think the biggest moment since was actually the week I got to go home for my homecoming. That was when it actually hit me that I was Miss Connecticut, or actually Miss USA. I had such a camaraderie. Not just from my family and friends, but from the entire state. People came from all walks of life to sit and cheer me on at the different events that I had throughout the state of Connecticut. It was so cool to walk into the grocery store, even, and have people stop me and say, "Hey! I recognize you from somewhere!" It sounds kind of surreal, but for me, it was just so interesting, someone living vicariously through me and they were so excited that finally someone from Connecticut had won. Whether they knew my grandparents or they went to school with me. It was a surreal week, and it was just so great to see a camaraderie of an entire state.

Sabludowsky: We're running out of time. Susan, Mia, any other questions?

Voss: How was the Miss Universe pageant in Russia?

Brady: It was incredible. I think just to be able to compete and meet girls, 90 women, from all over the world. In itself, that experience was unreal. Never mind being in Russia, competing for such a prestigious title. I think it's great because what people didn't know is that if I did not win, whoever did win was going to become my roommate, so I was really walking around, saying, "Man, I hope this one doesn't get into the top five!" You know, they are going to be my roommates, so once the top five were announced, I was like, "Okay, allright, okay, I can deal." It was perfect, because now I have beautiful Miss Venezuela. We got along very well. We have a lot in common. It's an interesting dynamic, going from being in competition mode with that person for three weeks to being their roommate and their friend. We really merged our lives very well. She came home with me for Easter, so that was nice.

Voss: And you made it to the top ten, too, so that was awesome.

Finch: So now you're in Louisiana. When I think of Louisiana, I think of food. Are there any fabulous, outstanding meals you want to tell us about?

Sabludowsky: There's a lot to do here. If you hear a voice going "Miss Connecticut, Miss Connecticut," that's probably me in the background. Thank you so much. We'd love to have you on a Webcast.

More in this category: « Naked Kate Middleton Exiled for no panties? Memorial Day Souls: Maginnis fought the Louisiana political wars »
back to top