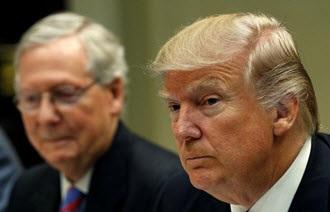 Saying “nice” people are indistinguishable from Nazis as Trump did, obliquely, runs contrary to all notions in the Bill of Rights. This President’s politics of exclusion returns the country to a time when America wasn’t great and challenges the American commitment to fair play and substantial justice.

With an unfortunately small number of exceptions, including Lindsay Graham, the Republican Party has sold its soul in a bargain that’s produced few, if any, tangible results. Trump could’ve said that the Department of Justice was investigating the Charlottesville riots and left it at that. Restraint, however, isn’t his style.

A normal President would’ve demurred to the feelings of those offended by Confederate monuments, and statuary, not a comparison of George Washington and Thomas Jefferson with Robert E Lee, a historical absurdity. Trump’s response to Charlottesville wasn’t outrage. It was a pathetic attempt to legitimize America’s darkest past by equating whatever counterpunch throwers there were in Charlottesville with torch bearing, armed, Nazis in uniforms, some carrying guns. This shows a lack of critical thinking, common decency, and bad math skills.

Trump inherited a prosperous economy, low unemployment, great international prestige, and an upward arc, in general. After a little over 200 days in office Trump presides over a nation hardened into a conflicted version of itself while he, relentlessly, persists in turning diamonds into coal. Trump’s party, instead of resisting the President’s darkest instincts, stands by and defends, or worse, encourages a man manifestly unsuited to be President.

Trump has threatened nuclear war with North Korea, intimated that the U.S. might back a coup in Venezuela, lobbed hand-grenades at Syria, jeopardized multiple international agreements, made the U.S. a laughing stock with his buffoonery, and threatened trade wars with Mexico, China, and other places. He’s scoffed at climate change, tolerated discrimination, degraded the environment, threatened healthcare for millions, and slavishly promoted himself as the all time, best ever, leader in the world.

Most of the country is horrified by Trump, as polls show, though there are devotees who worship him like a deity destined to sit at right hand of God the Father. Significantly, approximately, one half of Republicans would be willing to suspend the 2020 election if Trump asked. This is not democracy; it’s surrender of the country to forces that mock our institutions and empower our enemies.