Bannon-less Trump, how about Schwarzenegger 2.0? Featured 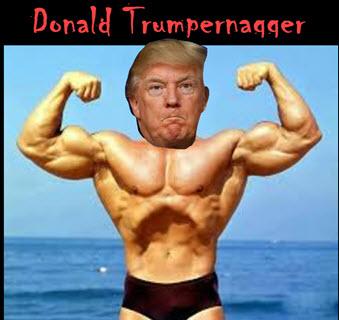 Arnold Schwarzenegger’s 2003 campaign was considered a joke to most people, initially, except for Arnold, his family, and friends with little, or no, sense of humor. The candidacy was all the more ridiculous because Arnold had trouble pronouncing the name of the state he wished to govern. (“Cawllie-e-fourn-ea-ah.”)

Whatever lean political experience Schwarzenegger possessed coming into politics for the first time stemmed from his action movies, (in the Conan series he played a king), and from his marriage to TV news personality, Maria Shriver, the daughter of Jack Kennedy’s sister Eunice. Maria took her husband to family parties where he smoked Cuban cigars with JFK on the waters off Hyannis Port, MA.

It was a “yes” or “no” vote on the recall that’d determine the sitting Governor’s employment status and, then, came the big choice. Pick from the 135 candidates seeking to succeed the morose Davis, an overly shy and cripplingly reserved man, if he’s given the boot. Everyone in the state ran for governor that year, except for the drunks who couldn’t get up off the sidewalk in time to file their papers.

Arnold’s win was handy but he was frustrated, early on, by a rejected initiative to reorganize state government, and by the fact Democrats controlled the legislature. He vented, occasionally, by calling them, “Girly Men,” the worst insult in his vocabulary.

Then something amazing happened. It was a political miracle, of sorts, Arnold starting talking to the Democrats. They listened and he listened. Things happened. Good things. Everyone was grateful for the progress and prosperity. The new Governor, even, improved his pronunciation and left office a good guy.

President Trump, another entertainer, might take note. He could put even more Americans to work if he reached across the aisle and talked to Democrats as he ramps up infrastructure spending. It would enhance revitalization of ravaged communities and the construction of new ones. If Trump worked with the other party, too,  he’d leave monuments to bi-partisan collaboration wherever he built. What has the President got to lose?

More in this category: Bannon forced out of Trumpville; Chaos, political warfare about to begin »
back to top