Tillerson's plan: US may not win, "but neither will you" Featured 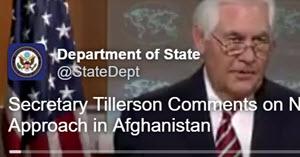 Perhaps one of the most striking statements he made could be construed that America was not in this war to win, but, just not to lose and to achieve peace.

Tillerson said that the US's Afghanistan effort meant to tell Taliban "you will not win a battlefield victory. We may not win one, but neither will you."

United States has been in Afghanistan for over a decade and a half without victory.  The game plan is to involve Pakistan and India to help from a regional standpoint and for the Taliban and Afghanistan to negotiate.  Trump and Tillerson emphasized no nation building.

Above are the latest tweets about the Tillerson press conference.