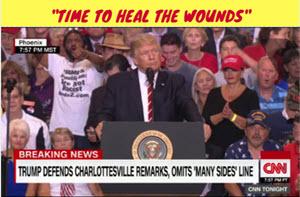 So, Donald Trump says it is time for America to come together.

Today, he will give a speech to the American Legion and he is reported to say, “"It is time to heal the wounds that have divided us, and to seek a new unity based on the common values that unite us. We are one people, with one home, and one flag."

Words. no more than words, that mean little or nothing, coming from the President of the United States.  But how in the heck is he possibly going to  heal wounds he has willfully gashed that are now festering, full of pus of hate and dripping venom?  How is this man going to bring America together when just last night, as he has done over and over, displayed that ministering the truth is impossible and scapegoating is a most powerful way to deflect from his own debilities and wrongdoings?

Here are just some of the statements he made in Phoenix and why it is blatanty obvious that there is no way this man can ever bring anybody together other than hardening the thirty-plus-percent of America that will never abandon him, ever. My responses are underneath in brackets:

"Believe me, if we have to close down our government, we're building that wall."

(Really? Closing down government, given his own party controls the legislative and executive branches--will that statement even bring Republicans together?  If anything, they might feel more comforted in their growing beliefs that he is politically dangerous and hurtful to their 2018 cause)

(I am totally against removing statues even those i deplore for they can be used for educational purposes.  If people out there want to adore false idols, let them.  But, what culture is he talking about? The culture of slavery? The culture of white supremacy?  I think we know what culture of which he is referring—the same culture that the KKK and the Nazis marched to defend in Charlottesville).

Referring to the likely pardon of Sheriff Joe Arpaio, he showed his lack of appreciation of racial sensitivities: "I'll make a prediction. I think he's going to be just fine, OK... But I won't do it tonight."

(Arpaio ignored federal court order in his treatment of Mexicans in particular.  You think the Hispanics will want to come together to defend and support Donald Trump?)

Referring to CEO’s leaving the business council, he revealed his vindictiveness "When it got a little heat with the lies from the media, they sort of said, 'Oh, we'll take a pass.' ...I remember the ones that did."

("Remember the ones that did"--Let the world understand this man's vindictiveness?  He’s telling the American business community that if you should cross him in any way, your company will face retaliation.  Donald Trump said he is a businessman yet he is treating our most powerful members of industry as if he were a Mafia Don).

"[V]ery dishonest media, those people right up there with all the cameras."

"But they don't report the facts. Just like they don't want to report that I spoke out forcefully against hatred, bigotry and violence and strongly condemned the neo-Nazis, the White Supremacists, and the KKK." (APPLAUSE)

"I hope they're showing how many people are in this room, but they won't. They don't even do that. The only time they show the crowds is when there's a disrupter or an anarchist in the room."

"All the networks — I mean, CNN is really bad, but ABC this morning — I don't watch it much, but I'm watching in the morning, and they have little George Stephanopoulos talking to Nikki Haley, right? Little George."

(Trump attacks the media for its pointing out his own dishonesty, duplicities, inconsistencies, acts of corruption and his lack of presidential temperament.  Again, he is increasingly showing America that he is unfit for office with his selfish scapegoating and inability to say anything even approaching the truth.)

"[T]hey asked me, ... what about race relations in the United States? Now I have to say they were pretty bad under Barack Obama. That I can tell you."

(True, race relations did turn sour towards the end of the Obama administration.  But, under Donald Trump, race relations are becoming so acidity, so combustive that many of us believe things just might explode).

"I really think they don't like our country. I really believe that."

(Is there anything more destructive to the soul of a people than to demonize those who might disagree? Whomever Trump might be talking about here, do they dislike the country or do they dislike certain activities and practices?  This statement is possibly the most harmful of all and underscores how far from a healer Trump can ever be.

There is no possible way that Donald Trump is going to bring America together.  He might be able to bring America back to a time total distrust for one another, and that certainly won't ever make America great. One night he sets up building blocks of sincerity, trust and harmony and the next night, he kicks it all away into smitherings leaving grotesque hate and ill will spewed all over the floor.  He caters to worst in all of us.  His message is music to the ears of one political extreme and scary screeching cacaophony to the other.  The energies and shrillness of the extremes swallow the center.

America is moving ever so rapidly towards distrust and discord.  Political hate permeates throughout social media that hatred and worse, violence, is being discussed brazenly and opnely. Trump is no healer.  His enemies in Congress and worse, in his own party and among its own leaders are becoming well documented.The media loathes him.  Many in the clergy fear him. Business leaders condemn him. They all have seen him demean their own culture and sense of decency which they have taught so gingerly to their own kids and expect from one another. f

If this country is going to survive as a great society, It is time for his own supporters to recognize he is the wrong messenger for their movement and surely damaging to America.

Unfortunately, we know that most likely won’t happen.

Too many of them love Donald Trump's every sneer and every insult.

Tweets about trump rally DO YOU AGREE OR DISAGREE? TELL US BELOW

More in this category: « GOP Congress, McConnell could Steele show with Trump Dossier Focus on Trump's stability as Bannon, Breitbart slam Afghanistan, globalism? »
back to top