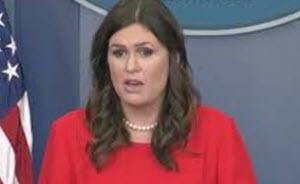 Yabba, dabba do!  It’s back to James Comey is a liar according to Sarah Huckabee Sanders, White House Press Secretary. “He lied,” she averred Monday, and claimed there’s new information that supports Comey’s firing as FBI Director. Brand new stuff! Can’t wait! Comey’s alleged dishonesty when he famously appeared before Congress to discuss his firing, Sanders said, was a matter for DOJ to investigate. She’s just a tad late and a dollar short.

When asked, precisely, what the former FBI Director said that was dishonest Sanders fell back on the “I can’t reveal classified information” schtick, to use an old Vaudeville term. Sarah needs an enhanced new briefing on the process by which material becomes restricted. It’s more than “we don’t like the question so we’re going to claim the answer is classified.” Nice try. Now try to stop mocking national security with double talk.

Ironically, the low regard in which various members of the current administration hold national security is evidenced by their perpetually revised applications for security clearances. One name, however, stands out above all others, Jared Kushner, who, reportedly, was a major proponent of the Let’s Fire Comey movement and, maybe, its instigator. Kushner has made so many amendments to his disclosure forms that it’s obvious he knows enough Russians to win a seat in the Duma, that country’s parliament.

It’s illegal to lie to Congress but hard to remember instances when it’s been punished. That’s how prevalent fibbing to to the body has become. There’s hope for the President, however, because if what he says is the truth about Trump-Russia Special Counsel Robert Mueller will confirm it. Muller, obviously, is investigating James Comey, too, because he’s witness zero.

If the Russia inquiry, however, is just about Comey, Mueller can send pink slips to his mob prosecutors, money laundering experts, and financial crimes attorneys and hire a professor of semantics, instead. It’d be odd if Mueller weren’t beyond the elephant hunting Don Jr.’s orphan lies, or Jared Kushner’s contagious bumbling; even Trump leases that run from Trump to Trump. The most serious danger to Trump from Mueller’s investigation is asset forfeiture. There, also, may be a RICO action swimming under the surface like a hungry Great White.

The good news is that Trump has been handed a unique opportunity to redeem his first 10 months in office that have been construed, most charitably, as rocky. During the campaign Trump asserted that his background as a world class builder made him uniquely qualified to be president. Hurricane season, that is Harvey and Irma, so far, gives him a chance to show those skills to best advantage. Start rebuilding ASAP and the thanks will be endless.

Also promising is that Trump just took his first tentative steps toward breaking partisan gridlock in Congress when he cut a deal with Democrats on hurricane relief and the debt ceiling. It’s a small start, but one Paul Ryan and Mitch McConnell will throttle in the crib given half a chance. These two Republican congressional leaders have proven to be literally hazardous to the nation’s health and are at contrary odds with the administration. Time for them to say bye bye.

More in this category: « Crouere: Clinton, disastrous candidate vs. Trump, that's "What Happened" Angele Davis as Trump for State Treasurer to #MakeAmericaGreat Again »
back to top