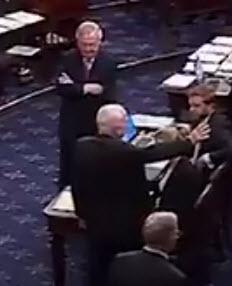 The "Ghost of Obamacare Repeal Failures of the Past" is returning, maybe.

Today, the long-respected Republican voice of the US Senate John McCauin of Arizona, has just delivered a significant blow to the latest attempt to repeal and replace the Affordable Care Act and what might be a slight to his best friend, Lindsey Graham, one of the authors of the Graham Cassidy bill.

Below is a statement from McCain:

In a statement, McCain said the lack of order in crafting the legislation was what pushed him away.

"I would consider supporting legislation similar to that offered by my friends Senators Graham and Cassidy were it the product of extensive hearings, debate, and amendment," McCain said. "But that has not been the case. Instead, the specter of September 30 budget reconciliation deadline has hung over this entire process.

"We should not be content to pass health care legislation on a party-line basis, as Democrats did when they rammed Obamacare through Congress in 2009," McCain added. "If we do so, our success could be as short-lived as theirs when the political winds shift, as they regularly do. The issue is too important, and too many lives are at risk, for us to leave the American people guessing from one election to the next whether and how they will acquire health insurance. A bill of this impact requires a bipartisan approach."

The President, top Republican leaders and Presdent Donald Trump have been trying to persuade the likes of McCain and others not to vote no and oppose the legislation.

Above  are tweets on the issue

More in this category: « Crouere: Trump's very Strange support for Traditional Establishment Republicans Dotard Donald Trump against Kim, NFL, NBA and Hollywood, coming together yet? »
back to top