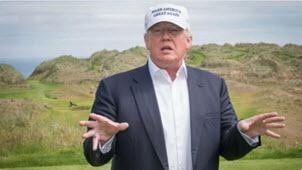 The President dedicated a golf trophy on Sunday to the citizens of Texas, Florida, and the lazy, broke, infrastructure-challenged Puerto Ricans who want everyone to do everything for them. Devastated, homeless, foodless, waterless, powerless, and despairing, Donald Trump blamed them for their own woes in the same breath he used to praise himself for helping these American citizens. Would that this were true.

The coat of arms of Puerto Rico dates to the early 16th century, granted by King Ferdinand and Queen Isabella of Spain. It features an Agnus Dei, which is a representation of the Lamb of God, Jesus; symbol of St. John the Evangelist. The Lamb sits atop an open Book of Revelations, written by John, with seven seals hanging down. It took more than five hundred years, but the apocalypse finally came to Puerto Rico.

The Island, Trump informed the nation in a bit of theater worthy of the Discovery Channel, sits in the middle of a really big ocean. It’s the kind of place only Christopher Columbus could find, which he did on November 19, 1493. Ponce de Leon, a Columbus lieutenant, was the Island’s first governor and promptly initiated a massacre of the Island’s natives in the attempt to promote gold exploration and exploitation of the Island’s resources for their Catholic Majesties.

Puerto Ricans are still being slaughtered –financially these days –by the likes of Goldman Sachs, Citigroup, Bank of America, Merrill Lynch and Morgan Stanley, globalists the President has complained about but has done very little to contain.

Puerto Rico owes $72B, mostly for infrastructure development, less than half of which was actually borrowed. When interest payments were incapable of being met, as it’s charged the lenders knew when they made the loans, interest payment, and other bonds were issued that, over time, ballooned the debt to its current levels. Sales taxes are now used to make interest payments, though they’re unlikely to ever repay the bonds, much less accruing interest, plunging Puerto Rico into even deeper debt daily.

In what’s been called a new form of colonialism, the Obama Administration signed into law the PROMESA bill designed to restructure the Island’s debt. The legislation, however, removes much of local control and places it into the hands of a board that, ostensibly, will deal with the crisis in a place where, approximately, 40% of children live below the poverty line and electricity prices, among other things, rise at frightening rates. This was pre-hurricane.

When the President blamed Puerto Rican officials for the financial plight of the Island, he is exacerbating a situation that, like the mortgage crisis, was precipitated by predatory Wall Street lenders. In the last Island election on whether Puerto Ricans, who have been American citizens for 100 years, favored U.S. statehood, 98.2% voted in favor of the proposition. Though not yet a state, the Island deserve a helping hand instead of scorn and further humiliation.