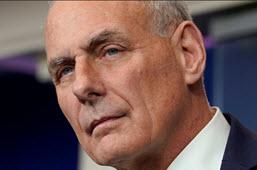 My own heart is saddened over White House events this week.

General  John  Kelly, Donald Trump’s chief of staff, in his desire to help the president make this country great again, is making another decent person, corrupt, yet again.

What person? General Kelly, himself, unfortunately.

No doubt, the Marine General exudes decency, respect and courage. He is the sober ying to his boss’s impulsive yang.  Yesterday, he shared with America how he walked among the great Americans at Arlington Cemetary to get some peace of mind and he surely displayed that inner peace and presence during the first moments of his “stunning" address to the press.

His presentation was heartfelt.  His comments about how he received the horrible info about the death of his own son was wrenching. His recommendations to Trump that the President should not call the family members were wise and compassionate. His defense of Trump's phone call intentions was legitimate.

But, into the press conference, he went into a territory he needed not enter. He went from the sober talk of valor, death, mourning, sacrifice into the zone of politics and in doing so, has become just another decaying body of men and women who are charged with speaking up for this president, Donald Trump.

Some claim that Kelly’s intention was to breathe life into the horrors of being a Gold Star family member, as only he, as one, would know.

But if that were so his intentions than why did he blast Congresswoman Wilson for her listening to a Presidential conversation that occurred while she was in a car with the grieving wife? If it were so improper for the Congresswoman to be an innocent bystander to a personal phone call, obviously, the only person we should care about here, the fallen soldier’s wife, had obviously given her and others, permission.

If it were so wrong to listen to a phone call piped into the car via conference equiptment,  wouldn't it be equally offensive to now disclose to the wife that others were also listening?

If General Kelly was so stunned and therefore blasted the Congresswoman for speaking out about this private conversation, why was he so stunningly silent about President Trump’s own predictable bizarre behavior?

Trump was the person who started this sad episode.  Instead of simply saying "no, I have not made the phone call, we all mourn for these families" he went into defense mode. He attacked. He falsely lambasted President Obama and the past presidents for not making calls. The next day, Trump dredged up Mr. Kelly’s own son to prove that Obama did not reach out to the General.

How is what the Congresswoman did worse than what the President did in lying or exaggerating the facts, blaming past presidents, bringing up the privacies of John Kelly, the father, in such brazen a manner?

At that point, by being silent about Donald Trump, yet so vocal about Congresswoman Wilson, John Kelly showed his true colors. He was acting as the Chief of Staff, not as the father of a fallen soldier.

But, Kelly’s corrupting of his own soul did not end there. Like his boss, he went on the attack. He claimed that Wilson was an “empty barrel” who bragged about how she got funding for a building to honor the FBI.

Even if true, what did that have to do with the death of his own son, the President’s phone call to a mourning wife and mom?

Nothing. It had everything to do with his own ob and his employer.

He then only fielded questions from those who had similar grieving experience.  Why? Would only they be able to ask questions about his assault upon a now demonized Congresswoman?

Four-star General Kelly became the attack dog for a President who only knows, to attack and accuse and name-call and who daily creates an environment so toxic that this country is poisoning itself with hate of one another.

If Kelly wanted closure on the issue by his presence, he must have been sadly mistaken.  Unable to control his impulses or just not wanting to make peace with the world, Trump, himself went on the full-throated slam, again, with a late night tweet. He called the now controversial congresswoman, “wacky”. He called her a liar. He said it was fake news.

The only thing that was fake was his statement that he never said what she had said that he said. John Kelly had confirmed she was accurate with the words uttered after all.

And so much for tranquility and moving on.

Perhaps worse, what was false was John Kelly’s statement about what Congresswoman Wilson had said regarding that FBI building.

A video has surfaced of the events of which he spoke. The video shows he was wrong. She did not take credit for raising money. She was not an empty barrel but her accuser has become an empty denouncer, with providing faux information to a grieving and confused public.

General Kelly, a fine man, a decent man, is fast falling dark in front of our own eyes. Perhaps any White House will do that regardless of who resides. But in this case, we know who he serves.  Surely so does he.

General Kelly should take another walk and talk with those voices who have fallen and given of themselvdes so we all can be safer and forever free. This time, perhaps he might dig deep and decide just how far he wants to go.  A man, who has spent a career protecting this country from outside evil forces, now must spend some quality time learning how to protect against an internal assault upon his own conscience and his much-admired reputation.

More in this category: « Trump's NASA not lost in space like Obama's, will reboot with SpaceX, private partners Plenty to fault Trump, but not his phone call to Johnson's widow »
back to top