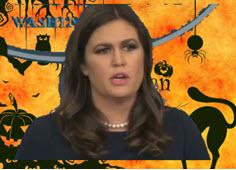 How did we get here? Can’t we stay on point and talk about the tax package, President Trump’s trip to Asia or at least, something safe that we can all agree upon, like the Trump-Russia, Clinton Dossier controversies?

On perhaps the very worst day of Donald Trump’s administration, in which two campaign volunteers, one happen to be his chief of staff, pleaded “not guilty” and a third volunteer, pled guilty to charges by Robert Mueller, the White House is being questioned about, what? Of course, slavery.

Apparently, it started Monday when Chief of Staff John Kelly, on Fox News, said that Robert E. Lee was an honorable man and that he put state over country, which at the time, was more important.

Specifically, Kelly said, “I would tell you that Robert E. Lee was an honorable man," Kelly said. "He was a man that gave up his country to fight for his state, which 150 years ago was more important than country. It was always loyalty to state first back in those days. Now it's different today. But the lack of an ability to compromise led to the Civil War, and men and women of good faith on both sides made their stand where their conscience had made them stand."

At the press conference today, when asked about Kelly, Sanders said she did not want to "relitigate the Civil War"  and said that "all of our leaders have flaws".   Then, NPR's Mara Liasson, asked whether the situation Kelly referring to was "to leave the southern states slave and the northern states free." "What was the compromise that could have been made?" Liasson asked.

The press secretary then said, there are "many historians" who "agree that a failure to compromise was a cause of the Civil War,".  She then said "there are a lot of different versions of those compromises".

This was followed up by Hallie Jackson of NBC's who asked if the White House would at least "acknowledge" that Kelly's comments were "deeply offensive to some folks, and historically inaccurate.".

In Trump administration tradition, Sanders refused to acknowledge or apologize. Instead she pushed back, as the President would expect.  Sanders denied that the statements were offensive or inaccurate then blasted the media for its’ "push that this is some sort of a racially charged and divided White House" and said the Kelly’s comments were taken out of context.  She said the controversy "absurd and disgraceful":

At the end of the press conference, Sanders hoped that the media would have a happy and safe Halloween when reporter from American Urban Radio Networks' April Ryan yelled "Does this administration think that slavery was wrong?"

The press session ended in a buzz.

Ryan, nor any of the reporters, responded to Sanders , “trick or treat”.