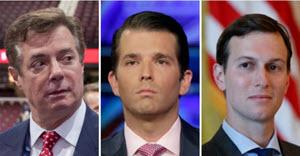 When the President of the United States has to issue a statement that he’s not disturbed that his campaign officials were indicted in the course of an investigation into Russian interference in the 2016 election, he’s very disturbed.

When Trump tweeted a photo of a campaign meeting at which Trump adviser George Papadopoulos pitched a Trump-Putin face-to-face, while both Trump and A.G. Jeff Sessions sat there around the table, it’s like the old joke of the husband caught in bed with another woman who asks his shocked wife “what are you going to believe; what I tell you, or what you see?”

Most people, now, consider Trump’s blustery denials of collusion with Russia to be a cognizance of guilt due to patent absurdity, outsized audacity, and substantial evidence to the contrary. Inexplicably, in recent polls, the party faithful, to a large degree, have reported a willingness to overlook collusion. The party that once prided itself on opposition to communism has sold its soul to keep Trump and an agenda sure to hurt them as healthcare showed. It may even result in a nuclear war!

Donald Trump has crowed that Special Counsel Robert Mueller’s indictment of Paul Manafort was a vindication of any claims his campaign colluded with Russia since Manafort’s alleged crimes were financial, not political. Trump couldn’t be more wrong. The money Mueller followed that led to Manafort’s indictment came from a former banker and ex-Ukrainian president, Viktor Yanukovych, who now lives in political exile in Russia. Manafort’s own daughter has accused him of murder.

After Yanukovych (who won his presidency in a slight of hand-assisted by Manafort) was ousted, Russia invaded the Ukraine and annexed it on the specious ground that Russian was the language of many Ukrainian citizens living in the Crimea. By that logic, Mexico could annex Los Angeles and many other parts of the Southwest. The strategic position and resources of the Ukraine were the real reason for the annexation and Manafort was well paid by Russia’s surrogate, Yanukovych.

Having been slapped with sanctions by the U.S., for the blatant seizure of the Ukraine, sanctions that cost Vladimir Putin and his crony oligarchs billions, Putin mounted a persistent campaign to reverse them. That Trump accepted Manafort’s offer to be his unpaid electoral factotum screams collusion, starting with the removal of tough language against Russia’s interests in the Republican 2016 platform. Trump has refused to enforce additional, new, Russian sanctions.

When it all unravels, if more Republicans stand with Trump than not, the party will pay a price that may doom it for a generation, if not forever. It’s the price of cowardice.