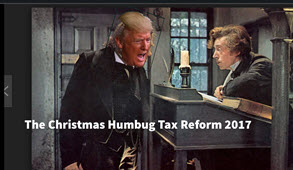 The problem with this end-of-year-bonus--nobody knows what’s in the box.  Not Trump, not the Republican House and Senate members, not a single person in Washington DC. Nobody knows how it will be scored.  As a country, we don’t know the impact upon the middle class, the deficit, and we certainly don’t know how it will affect the Tiny Tim’s of the world—the lame, the sick and the poor.

Instead, we know we are getting a lot of "humbug".

The Scrooges and uber-scrooges are giddy.  Everyone knows they have greatly benefited over the past couple of decades and now their stock markets have gone through the sky. Meantime, the rest of us are told to sacrifice and accept the Gift of the Magi.  Yet, those who don’t really need will protect their inheritances, hide their bank accounts from the United States Treasury, just like the President hides his own returns from the people he serves.

Instead of fashioning a good bill that the country could embrace, Trump and his Trumpettes push a final New Year’s monstrosity. Time ticks and work must be done before the clock strikes January 1.

Seven years ago, many of the same justifiably lambasted the Democrats for passing legislation that revolutionized healthcare delivery that was then as unpopular as slugging down a pint of castor oil.  Republicans preached that nobody should vote on legislation unless they read it. For the past seven years, Republicans have blasted Barack Obama and his own merry men on the left claiming the former President and the Democrats must heed the people. “Listen to the people” has been the mantra on the right.

Instead, ever since Trump took over the presidential twitter account, he and his lapdog members in Congress have done anything but listen to the people.  As a result, America sees their real motives are not to follow their own guidance, but their own political greed.

Healthcare failed, not because of John McCain but because the Republicans failed to honor their own pledges.  Instead of being open with the books, they kept them off-limits to the public.  If Democrats passed Obamacare like we serve fast-food, Republicans are pushing powdered food--pour,  drink and be satisfied.

Now, President Trump and Congress are at the end of the year without a single win, no infrastructure plan, no welfare reform, certainly no healthcare bill-- just a bunch of unfulfilled promises. The reason for their failures is not Mitch McConnell, Paul Ryan.  Claiming this is too simple.  It’s way too easy to blame others than accepting reality and absorbing fault, when due. And, yes, it is due.  The far right and Trump’s Bannonites pushing all of this nonsense have it all wrong: America lives--not in his image, far, very far from.

The truth is, America despises Donald Trump’s bizarre behaviors and his lack of grasp of basic policy.  It is upset that no Republican stands up to him except for maybe a few brave soldiers, who have had enough and who are leaving the war. It detests the way the President and his henchmen are shoving down legislation in contravention of their prior promises.  It doesn’t want Congress to just pass legislation that helps them perhaps keep false momentum.  Instead, America wants country over party.  It wants Republicans to reduce the deficit, something that party once cherished or claimed they did until they got control of the sleigh.

Passing Tax reform immediately so Congress can go home with a collective smile--as if it accomplished something for the year is simply playing America and worse, themselves like fools.  America does not want a revolution for the sake of revolution. It wants intelligent and deliberate policy. It wants Congress to pass and for the President to sign legislation under the same risk of perjury that the rest of us face when we are charged with knowingly signing our tax returns.

America is not looking for maybes.  It’s not looking for quick drips in the form of tax pittances while the billionaire president and Wall Street friends gobble up all the Christmas turkey. They want America to be great just as he says he does. Unfortunately, making false promises while pushing unread gifts is simply making America weary.  And Angry.

More in this category: « US Senate must pass Trump's Tax Reform or abdicate control to Democrats Trump, Transition Team bark about Mueller's GSA email byte »
back to top