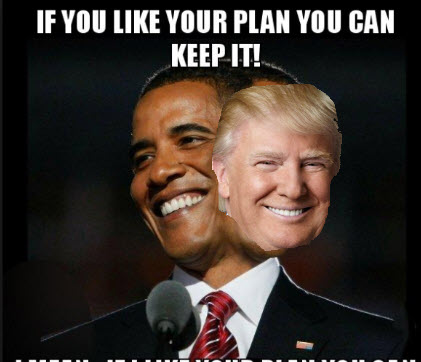 The Republican mantra was, Obama lied.

Perhaps he did, or, perhaps he got bad poop and said what he thought he knew. Regardless, he broke his promise to the American people and Democrats including Hillary Clinton paid the price.  It was one of those George Bush, “Read my lips, no new taxes” moments that virtually sink a politician.

So, fast forward to the present.  A different president and different promises.  This one, delivered by President Trump, who successfully reminded his voters during the campaign that Obama and company did not do what they said they were going to do.

Throughout 2015-2016, Trump promised the middle class would benefit from the tax cuts, but not the rich, like him.  He also promised that his plan is revenue neutral.

His comments about how he and his family and friends would be hurt is laughable.  As Bloomberg said, ““The rich will not be gaining at all” from the tax plan, Trump said on Sept. 13. He has repeatedly said the legislation won’t benefit him, even insisting he’d be a “big loser” if it passes.

Here are some other choice promises and comments easily retrievable on the Internet:

Trump insisted that the GOP tax bill is going to cost him a "fortune."

"Believe me," the president said, "this is not good for me."

As reported by the New York Magazine, “They can call me all they want. It’s not going to help,” Trump said of his rich friends. “And it’s not good for me, believe me.”

“Tax reform will protect low income and middle income households, not the wealthy and well connected “

And we’re gonna make it nice and simple.And we’re getting rid of carried interest.

Even his Secretary of Treasury, Steve Mnuchin recently said, There will be no tax, absolute tax cut for the upper class

By now, we all know that his promises are simply not true and these promises were made recently, so, if he and/or his staff made them knowing they were not true, that, my friends I would submit are probably lies.

How good is the tax plan for the rich?

According to Forbes, “But the reality is that high-income individuals would get more than 60% of the benefit of the tax bill, thanks to its cuts in the top income tax rate and the AMT, its preferential tax rates for pass-through businesses, its corporate rate cut and its bigger estate tax exemption.”.  Also, read The Trump Tax Cuts Just Got Even More Skewed to the Rich or the literally thousands of articles discussing the issue.

The broken promise topic was addressed on Sunday’s Meet the Press during an interview with Marc Short, Trump’s Congressional Liaison.

Uh I want to play for you a list of promises the president made when it came to taxes and discuss them with you after you hear it, here it is:

At the center of our plan is massive tax relief for the American middle class.

And we’re gonna make it nice and simple.And we’re getting rid of carried interest.

All of this does not add to our debt or deficit. In other words it’s going to cost me a fortune.

Alright, none of those things are true right now. We can debate the middle class aspect, in a minute, that I that that that I concede. But we’re still at seven brackets, no more tax simplification, we still have the carried interest issue which is something he vowed to get rid of multiple times as a candidate, and by the way, he does personally benefit from every analysis on this, and there is a hit on the debt. What do you say to those broken promises that the candidate Donald Trump made on taxes?

Chuck there are many deliveries here in the bill that the president made promises on. One, it does simplify the tax code, some of the things you’re not talking about is that it eliminates oil and gas production credits, it also eliminates many deductions that families and business were taking such as specifically lobbying expenses. It’s helping to drain the swamp. There are promises he made he delivered on. There are certain industries here that made it impossible for us to deliver on every single one of those. But keep in mind what’s most important, Chuck, we’ve lowered the corporate rate from 35 percent to 21 percent, to bring jobs back to our country. That was a signature accomplishment in this bill, a 40 percent reduction, he is lowering and delivering middle income tax relief to families across the country. For an average single mom, earning $40,00 a year with two children, she gets a $1,400 dollar tax benefit. For the average family of four earning $70,000 a year, they get a $2,000 dollar tax benefit. He delivered on his promise to focus on middle income families as well as to provide corporate tax relief. The simplification, there are several elements we did simplify. We didn’t get as much as we want, it’s a part of the compromise here you have to work with.

Obviously, no doubt President Trump is delivering on promises, but, as to the question of the rich—Short conveniently did not address that subject at all.

Under no circumstances am I saying that the tax reform bill is bad although at best, only 30 to 44% of the voters approve of it which ironically, goes against another promise Republicans appeared to make when they slammed the Democrats on Obamacare.  Remember, the call to “listen to the people”?  Implicitly, the Republican Congress is failing to listen to the people..

Also, to me, cutting taxes for corporations makes sense for the country to be competitive. Giving large tax cuts to the rich while skimping on the benefits to the ever-shrinking middle class, does not.

We can debate the benefits and disadvantages of the tax plan.  However, the real debate won’t happen in Congress since the legitimate complaint by Republicans against Nancy Pelosi and the Democrats during the Obamacare passage, that Congress should read before voting, has been recklessly discarded, now that they have total reigns over the federal government.

Instead, this column is not about the merits or disadvantages of the legislation except to say the middle-class needs and deserve much more and the rich, so much less.  Who knows?  Maybe the Trump and Republican economists will be right.  Perhaps the economy will soar by 3 to 5% per year and the stock market will continue its astronomical rise of 22.7% since January 2017 inauguration (During the same comparative time period under President Obama, the same market also rose by 20.99%, a significant achievement, not mentioned by the Trump administration or others). Maybe the unemployment rate will continue to drop like a led pipe after "halfing" under Obama.  Maybe the tax reform package which Trump will likely sign this week will be the "American economic miracle".  If so, the President and the Republican Congress will deserve all of the credit for going against the public and the government watchdogs who are predicting just the opposite.

No, this piece is not about the legislation's merits.  It's about inconsistencies, hypocrisies, broken promises and yes, lies.

President Trump and his staff have either broken their promises about the rich or they have told the whopper of whoppers. The Republican Congress, who slammed Obama and the Democrats about “broken promises” and “lying” has been totally silent on this substantial part of the bill, they will likely approve today or tomorrow.

The rich and the uber-rich, Trump and his friends, his family (and the Republican-rich campaign contributors) will likely become so much wealthier by this legislation while the middle class, not so much.

What about,"You can keep your doctor and your plan"?  "The rich won’t benefit, at all"--what say you, Mr. Trump, Fox News, Mr. and Ms. Republican Congress?

All broken promises? For certain.

You be the judge.