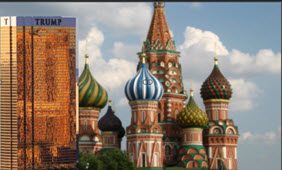 A few months ago he called the prior White House occupant, “a sick man” for allegedly tapping into the Trump phone.  He has been at war with what he calls “Fake News”. He wants the Clinton’s Uranium One deal investigated. He wants anybody associated with the Russian dossier --under federal scrutiny.  And now, despite the fact that he once said don’t put Hillary in jail, that she was a nice lady, now that he is under investigation, he wants her and Bill to be under the watchful eye of Congress and his Justice Department.

He says he has problems with Obama and company probing into his business and politics, yet, he appears to be giving orders to his justice department not only to obstruct the investigation against him but against his political enemies.

At least Nixon did this under cover. Trump is doing it in public and on Twitter. The chutzpah.

On Facebook, his ardent supporters appear to have his back all of the way.  Recently, one of my Facebook friends wrote, if the Clinton’s don’t have anything to hide, then, why not investigate?

Yet, despite the body of public information, claims by his own former senior advisor, public testimony from court records, there is no reason to query into Trump and Russia?

Then there are the Facebook posts that parrot the Trump talking points-- “there’s no evidence of collusion, that has been proven after one year of investigation and if there were any collusion, all of that would have come out by now”.

But, there has been no evidence of wrongdoing by the Clintons and now we are about to embark on a fourth year of inquiry into Hillary Clinton.  Oh, and let’s not forget Whitewater, Vince Foster’s death and other alleged acts of wrongdoing.  Hillary and Bill have been probed more than any politician in recent history.  But according to Trump and his supporters, since Congress, the media nor Bob Mueller has not brought forth evidence of collusion after one year of federal investigation, that is clear and convincing evidence that there is nothing there?

Let’s be real. If the justice department, notwithstanding the intrusion by the current White House has something on the Clinton’s or Comey or Loretta Lynch, I say, knock yourselves out. Probe. If there are bad apples in the FBI and justice who were biased against Trump, weed them out, as Mueller has done. But, don’t think the bad apples stop there.  Remember Rudy Giuliani acting like he swallowed a canary, only days prior to Comey’s October surprise reopening of the Hillary probe? Shouldn’t that be under scrutiny? And what about the recent Nixon-like interference by the current administration into the current inquiry and into Hillary and Bill and the alleged FBI bias of Trump?  Shouldn’t we probe, investigate, scrutinize there too?

We should drill baby drill and if we find something untoward, we should burn, baby, burn.

But please don’t tell me there is no reason to examine Trump and company. If for any reason at all, the burning questions must be answered--why are so many people associated with Donald Trump's candidacy forgetting and lying about meetings with top Russian officials? Why are they trying to hide details about a Trump tower meeting in which Don Jr. and others were ready, willing and able to obtain top secret information from the highest level of the Russian government?  Why did Donald Trump not disclose to the public during the campaign his efforts to land a Trump tower deal in Moscow? Why did Trump claim no business deals with Russians yet, there is substantial evidence to the contrary? Why did Trump say that he never met with Putin, yet, he also told us that he has met with the Russian leader? Why has Trump fumed and lashed out at every person in plain sight, yet, when it comes to Russia and Putin, never a contrary word even during the campaign? Why has Trump refused to blame Russia and Putin for meddling in our democracy even though all intelligence leaders under both Obama and this administration, insist that he should?

Just for these reasons alone, we, as Americans, in order to ensure that we are protected and that justice be done and that no person is ever above the law, must get answers to those questions which are integrally related to these below:

Yet, we are told by Trump and his collaborators that none of these questions have any merit yet, the real colluders are Obama, Hillary, the Dems, Comey, and Mueller.

And maybe they're willing to buy a Trump Tower in Moscow, too.