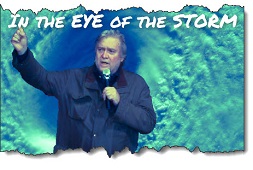 Bannon’s testimony, on this point, was a stunning revelation that Special Counsel Robert Mueller, likely, will pursue with some diligence. Trump’s former chief strategist, not surprisingly, received a Mueller subpoena, virtually contemporaneously, with the intel committee’s own subpoena issued because of Bannon’s failures to fully answer the committee’s questions. Even Republican Congressman Trey Gowdy, erstwhile Trump supporter, and Clinton antagonist, expressed frustration with Bannon’s elusive testimony.

It may be subtle, but failure to assert privilege at the earliest opportunity may be deemed a waiver. The White House’s failure to adequately contain Bannon whom it, ostensibly, was directing, (though it denied the fact),  invited further scrutiny of Don Jr.’s attempt to gain intelligence, of questionable provenance, on Hillary Clinton. Then again, Bannon may have slipped-up on purpose to taunt the president, his oldest son, and other family members.

The president’s son-in-law, Jared Kushner, and daughter, Ivanka, had warred with Bannon over the firing of then FBI Director, James Comey. It would prove to be a regrettable act by political neophytes. All Bannon had to do was keep his own counsel, track progress on Trump’s promises, and wait for the couple to flunk out but, by discussing the matter, didn’t.

Though evasive with the House, Bannon, immediately, told Mueller he’d cooperate and answer all the Special Counsel’s questions. Setting the stage for the final breach between the president and himself were Bannon’s allegations in a book, “Fire and Fury” by Michael Wolff. Bannon made it clear to Wolff that he thinks Trump was poorly served by staff and family.

It’s getting hard to imagine how Trump can survive the fallout from the Russia scandal. It’d be sad, too, if the White House attempted to use the shield of executive privilege to obfuscate conduct that, conceivably, could be judged wrongful. If the law protecting presidential communications from wrongful dissemination is misused for political purposes, that can pose a risk.

Trump was an entertaining and enthusiastic campaigner who stuck it to the stuffed shirts. Notwithstanding, future negative information, if true, might reveal the president was unprepared for demanding government service by reason of training and lack of prior experience. As a result, he may have surrounded himself with inferior aides who must, now, make the hard choice between loyalty and self-preservation. Bannon, it seems, has already decided what he’s going to do.

There are many legal barriers to taking a president down via impeachment and it may serve the Democrats to keep Trump in office instead of trying to remove him. Impeachment, unless clearly warranted, ought to be reserved for truly egregious conduct. Many believe Bill Clinton was unfairly treated by having to defend against charges related to the Lewinsky matter. It’d be wrong to subject the country to another show trial, even if public opinion favored such a course because, when all is said and done, we are a nation where electoral integrity is fundamental\