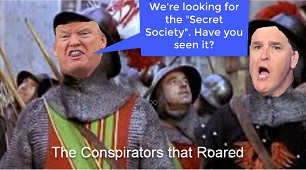 The sheer novelty of Trump’s candidacy, and its designs on boosting a brand that was facing financial hardship as balloon payments on less than successful properties were coming due, could explain the candidate’s tabloid inspired insistence on name-calling, shameless pandering to the worst elements of a dissatisfied electorate, and disregard for media that makes, or breaks, most politicians. The verve and bravado that put Trump in the White House, however, cannot sustain his forward motion because it’s still patently unseemly.

The economic miracle that accompanied Trump’s rise to power was a continuation of upward trends fostered by Barack Obama that lifted the country from a deep recession. Despite contemporary theorists who laud Trump’s handling of the economy it has proven, time and again, to be less dependent on any one man than the cyclical nature of business. Trump was more the beneficiary of luck than skill, recently aided by a giant 1.5 trillion-dollar giveaway to the rich who applauded the move more than the U.S. putting a man on the moon.

In the process of governing, Trump has shown stunning ignorance as he, and his remarkably under-qualified cabinet, have advocated for policies that, while short-term popular, will have grave consequences for the nation. Trump’s misguided notion of Amerexit will create a void in the world’s balance of power sure to affect the U.S. by diminishing American diplomacy, of which trade has been a key element, and an effective carrot to prevent migration and war while boosting industries at home. Further, his disregard for climate change is scandalous and ignorant, per se, as it represents a retreat from science and common sense.

Then, there’s Trump’s brinkmanship with North Korea, sufficient to cause Hawaiians to run for their lives after cold war foghorns proved how silly the noise system was even seventy, or more, years ago. Children and young people, however, got a taste of what it was like to scan the skies for mushroom clouds moments before incineration and universal doom hit.

Trump, besides a pathological need for personal enemies, has created a new class of them, besides the previously identified fake news, alt-left, and the deep state. This new threat is the “Secret Society,” in contrast to Lyndon Johnson’s Great Society, that Trump believes tried to prevent his election and, after he won, aims to hobble his presidency. He’s right, of course, except the secret cabal isn’t anywhere near secret and, in fact, operates quite openly. Its name is the Democratic Party.

More in this category: « Donald Trump, Stormy Daniels--John Edwards, Rielle Hunter--DOJ Kind of a hush? Trump's State of the Union Address, can he bring America together? »
back to top