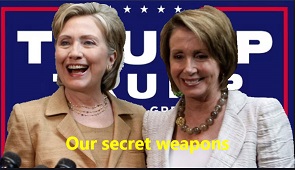 The Trump administration is in the midst of another shake-up as a new Secretary of State and CIA Director were announced this week. More changes could be coming in the days ahead. While these changes are probably very good, the impression of an administration in upheaval is unmistakable.

The President also faces the prospect of porn star Stormy Daniels continuing to generate media coverage. She will be interviewed on 60 Minutes next Sunday and her attorney is claiming that she was physically threatened. Daniels is alleging an extended affair with Trump in 2006-07 and says she was paid $130,000 in hush money in October of 2016 by an attorney representing the President. While this controversy begins to heat up, the Mueller investigation rolls on with a subpoena of documents from the Trump organization. This witch hunt, which has demonstrated no evidence of Trump collusion with the Russians, shows no sign of ending anytime soon.

For the Republican Party, a special election loss on Tuesday was hopefully a wake-up call. The Democrat electorate is very motivated and going to the polls in large numbers. In contrast, the base of the Republican Party is not especially motivated because congressional leaders have not delivered on promises made in the 2016 election. Other than tax cuts, the GOP cannot claim any major legislative victories. The wall has not been built, Obamacare is still in place, spending is still out of control, and the infrastructure bill has not been passed. While Republicans are satisfied with the results from President Trump, they are not pleased with a do-noting Congress.

Not surprisingly, on Tuesday, the GOP apparently lost a very close congressional race in a Pennsylvania district that voted for Donald Trump by a 20% margin in the last election. It follows another heartbreaking Republican Party loss in the Alabama Senate race in December.

These special election outcomes could be an indication of what will happen this fall in the mid-term congressional races. Understandably, Republicans are becoming more anxious as these elections draw nearer. If Democrats take 23 seats, they will control the House of Representatives for the first time since 2010.

Historically, it is always difficult for a political party in power to do well in mid-term elections. The parties of recent two-term Presidents, Ronald Reagan, Bill Clinton and Barack Obama, all suffered losses in their first mid-term congressional election. The only exception was President George W. Bush and the 2002 election in which Republicans picked up a total of 10 seats. This aberration was mostly due to the surge of patriotism after the 9/11 terrorist attacks and the war in Afghanistan.

One silver lining for the GOP is the unpopularity of Congresswoman Pelosi. In recent days, she has had to retract her insulting comments that the recently passed tax cut legislation only provided “crumbs” for the American people. She has also been shaky in many recent speeches and interviews. On several occasions, Pelosi has suffered a “brain freeze,” losing her train of thought, mispronouncing words and referring to Donald Trump as “President Bush.”

The 77-year old Minority Leader is an albatross around the neck of all Democratic congressional candidates. In the Pennsylvania special election, Democrat candidate Conor Lamb used a television commercial to pledge to voters that he would not support Pelosi for the leadership position of the Democratic Party caucus. If the Democrats win back control of the Congress, she may not be elected Speaker once again.

Pelosi is not the only Democrat woman who should consider retiring. This week, 70-year old Hillary Clinton visited India on a disastrous three-day trip. She was captured on video slipping twice as she descended stairs being supported by an aide. She also fractured her wrist in a bathroom mishap.

In India, Hillary was not only injured physically, she also injured her rapidly declining political standing. In a speech, she made a series of insulting and reprehensible remarks, even suggesting that Trump voters were both racist and misogynistic. She said, “I won the places that represent two-thirds of America's gross domestic product. So, I won the places that are optimistic, diverse, dynamic, moving forward. And (President Trump's) whole campaign, 'Make America Great Again,' was looking backwards.” She also claimed that Trump voters “didn't like black people getting rights,” and didn’t like “women, you know, getting jobs," and didn’t want to “see that Indian American succeeding.”

For good measure, Hillary also insulted the women who voted for President Trump. In essence, she claimed that these women were mere puppets of their husbands or bosses. According to Hillary, women rejected her only because of “a sort of ongoing pressure to vote the way that your husband, your boss, your son, whoever, believes you should."

This truly exposed Hillary as an arrogant, narcissistic and self-absorbed politician. She refuses to examine the real reasons she lost and continues to everyone else: Donald Trump, Republican voters, former FBI Director James Comey, the Russians, and the media, to name only a few.

For a candidate who had 95% of the media in her corner and twice as much money as Donald Trump it is amazing that she lost. She cannot come to grips with the reality that her message, her personality and her campaign tactics were dreadful. The more she refuses to go away and publicly complain, the better the political prospects become for the Republican Party.

More in this category: « Is Mueller crossing Trump's red line where GOP House Intel failed to go Trump's double toil with trouble, off with McCabe, Tillerson's heads »
back to top