Trump's double toil with trouble, off with McCabe, Tillerson's heads 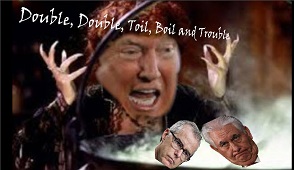 Tillerson, former chairman of ExxonMobile, was the recipient of Russia’s Medal of Friendship due to a deal he struck for Exxon with Rosneft, Russia’s state oil company in which President Vladimir Putin, allegedly, has a 50%, or greater, ownership position. Sanctions over Russia’s Ukraine misadventure, however, kept the deal from bearing fruit. Having a friend at State may be one reason for the persistent rumor that Putin intervened to influence the selection of Tillerson over the more Russia hawkish Mitt Romney.

The talking point used to defend Trump’s dismissals from the administration is that as CEO of America he can choose his own team. That’s true, but only to a limited degree. The President isn’t running a sole-proprietorship where he can do as he pleases. He heads the largest public corporation in the country and its citizens, and each of them, has an equal vote. The primary duty of the head of a non-profit is to serve the beneficiaries of its trust. That’d include the most vulnerable.

Destruction of public education in order to privatize it doesn’t serve children at schools already cash-strapped. Cutting entitlement programs, so companies, and high-income individuals can increase profits and wealth, hurts the poor, the sick, and needy. Dismantling the EPA won’t keep pesticides out of food, clean the air, or make water safe to drink again. This is a mere sampling of areas targeted by the administration for radical change. Trump’s supporters voted for him to enact sweeping changes, but not to hurt themselves and their fellow citizens.

The FBI, and intelligence agencies, broadly speaking, have drawn the ire of Trump who appears to regard them as personal servants. Firing McCabe, about ten minutes before his retirement, to affect his pension rights, was intended as a sign to agents investigating Russia that there is a financial cost to patriotism. The agency has made mistakes, and its own website details some of them for everyone to see. The military has made some, too, but Americans continue to support it, as they should the FBI, an organization devoted to justice, not political whim.

Sometimes it’s best to let investigations run their course. Impeding them only makes their target look guilty. Sometimes it’s better, as Lincoln demonstrated, to tolerate differences of opinion in the cabinet. There will always be a loyal opposition, even in Russia, though in democratic societies their views are respected, not condemned.

The litmus test for patriotism is love of country, not blind loyalty to the leader. Trump says he likes chaos. The public doesn’t because it’s not conducive to domestic tranquility. Until Trump realizes this and is president for all the people, he will be the president for the few. America is not a client state of any other country and the president should stand up to external threats to our independence. If he is unwilling, or incapable, those who do his job for him are patriots.