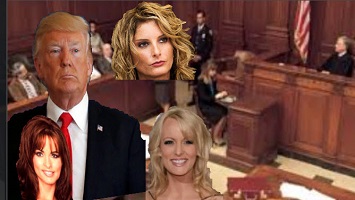 Obviously, that issue emerges out of the investigation into possible Trump campaign “collusion” with Russia.  While the Republicans in the House Intelligence Committee have claimed they have found no collusion, all is not well for Trump and his administration.

Recently, we have read that Cohen paid Daniels out of his own home-loan, to remain hush, in an amount of $130,000, apparently, "Trump chump change" for those attorneys on The Donald's “fixer list”. After denying the claim, Cohen somehow spilled the beans admitting his involvement in the scheme, Stormy then suffered a brain-storm change of mind. Currently she claims that Cohen opened the door for her to break a hush confidentiality agreement, thus, she wants to tell her somewhat revealing tale to the world.    Now, the porn star is ready for her version of "I had an affair with Donald" story to be told on Sixty Minutes on Sunday, reminiscent of the suspense when Hillary, in her best-southern Chicago drawl, told the nation she was not the Tammy Wynette kinda woman. Yet, that's exactly what she did anyway. Back then, getting Hillary’s response to Gennifer Flower rumors captured many Sunday evening eyeballs.

So, Stormy Porny Daniels has put a damper on things for the President, this winter.

But today, it is spring and hopes sprung eternally, if not sooner.

And today, it appears that the women in Trump’s life are spring out all over the place in media land.

A New York Judge has just rejected a claim by Trump to dismiss a lawsuit for his alleged groping of “The Apprentice” contestant Summer Zervos, which she claims occurred in 2007. Despite Trump’s efforts to do a President Bill Clinton and say he was immune to state court lawsuit and just too busy anyway, the decision opens the door for possible deposition. Remember Paula Jones, anyone? |

The President knew how to pick them.
According to the failing New York Times, that Fake Newspaper who somehow seems to break news stories the President never seems to be able to deny, has broken another one.

Karen McDougal, who is alleging she had a nine month affair with Trump is suing one of the President’s favorite publication, the not so-fake news, America Media Inc, the parent company of the National Enquirer. The allegation, similar to that of Stormy’s, is somebody wanted to keep her mum. In her case, she asserts that the media company entered into an agreement to publish her Trump-love story but sat on it.  Since they had lifetime rights to her story, and since they just did not run it, her life in print never saw the light, particularly around election time 2016, amazingly, just like what happened with Stormy.  McDougal states that around the same time that Daniels and Trump were lighting it up a storm, so was she, with him. Thus, the Enquirer's parent company promised to run her story but did not. Ergo, the supposed hand of Trump and friends.

In another all American "Believe it or not", the parent company of the Enquirer, of all publications, is supposed to have stated she was not credible,therefore canned the story. I guess they were too busy at the time running a long piece that made a rise out of Hannity. That one was about Hillary and was nicely titled, "National Enquirer’s New ‘Bombshell’: Hillary’s an ‘Evil,’ Bisexual ‘Secret Sex Freak’.

Don't fret, though. Donald Trump, had a great day this weekend. Andrew McCabe, the now-former ex-FBI assistant director got canned for not being “candid”. He called that a great day for American democracy. Unfortunately his elation might be short-lived as he reportedly is now, once again, unnerved. Last week, the news reports said the was looking for an additional attorney, a media claim he he outright denied.  Trump said he was most pleased with the counsel at hand.

Now, like many times in the past, the so-called FAKE NEWS narrative has changed a bit. Yesterday, he did in fact take on another attorney to help him with the collusion rap and possible obstruction of justice.

Well, so am I.   But at least, we have a consolation. We have not heard cries of the coming of Russia Russia Russia women, right?
Not yet.

More in this category: « Trump's double toil with trouble, off with McCabe, Tillerson's heads Trump slams "FAKE MEDIA", claims he's nice to Putin for Russia's help in solving problems »
back to top