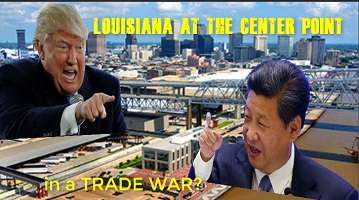 From a pure theoretical economic standpoint, which states would be hurt by a trade war?

If you looked only at two numbers, GDP and percentage of the GDP, two states, very important to the political future of Donald Trump and the Republican Party, are Michigan and Louisiana.

Michigan, of course, is a battleground state that Trump surprisingly won in his defeat of Hillary Clinton.  Louisiana? Very loyal Republican terrain with only one statewide Democrat official, that is no less than the governor, John Bel Edwards, that some believe won by fluke. He ran against David Vitter, who was still smarting from a prostitution scandal and who was very powerful politically, but not well-liked personally.

As reported by Business Insider, Louisiana's GDP for 2017 was $243 billion with $94 billion due to trade. That equates to 38.7% of the states' GDP. Michigan would be hit hardest with 39.9% arising from international trade.

Worse, Louisiana is a leader in terms of exporting to China. Business Insider reports, "Five states exported more goods to China than any other country in 2016: Washington, Oregon, Alaska, Louisiana, and South Carolina, as can be seen in the following map of the top export trading partner in each state for that year.

So far, the two countries are threatening one another and total dollars involved in the attack-counter attack is uncertain. However, taking the biggest hit so far as the stock market which has tumbled under 24,000 on Friday with a 572.46 point drop on Friday.

More in this category: « Michelle Obama's off about with "Parent President", Trump voters saved America Crouere: Trump needs to fire Sessions, Mueller, Rosenstein before he's fired »
back to top