James Comey battling President Trump in the ring of TRUTH 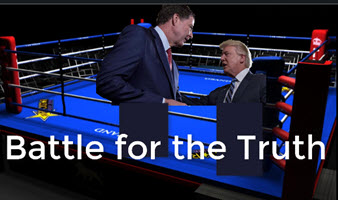 The bell has rung. The battle match for the truth has begun.

So we can all agree that James Comey made major mistakes during the 2016 elections. And, I think most of us can agree, that Comey  continues to do so as he swings at President Trump recounting it all through his book and TV appearances.

Cutting to the chase, with all of the punching, bobbing, weaving and President Donald Trump's famous counter-punches, is anyone landing any real blows. Or, are we watching too much swinging below the belt?

My point is this:  While all of the statements Trump and his attackers are making, what matters is, can Trump and his handlers soften any of the legal blows Comey has made against the challenger.

Fighting over history is a great debate.  Indeed, Comey has erred, badly. He was in a political-legal corner but he should not have gone public after Bill and Loretta fouled the air.  Then, he entered the ring again in late October. Despite the pro-Trump FBI allegedly outing him with their threats of their leaking and going public the Hillary investigtion, he made the announcement that Clinton investigation Part II, was about to begin.

Now, we can all laugh or scorn that Comey is opining about Trump’s orange appearance or his hands. We can also feel uncomfortable that the former FBI Director is opining whether the president is morally unfit to serve.

Now that the battle is drawn and the two opponents are eyeing one another in dead center, the really important legal contest is becoming nothing more than a circus.

I don’t like what Comey is doing. When I first read that Comey was writing a book, I thought, Good Grief!! The last thing this country needs is for the former head of the FBI to discuss (aside from a public hearing) what happened in the White House and at the DOJ.  There are investigations going on. He needs to use the stature of his office and his height. He should stand above it all.

It is bad enough that the president through his very many offensive tweets and statements have torn the dignity of the Office of the Presidency into shreds.  It is horrible that the President is demeaning American intelligence and our country’s judicial system. It is horrible that he makes it a practice to demonize others, winning through intimidation. It is abusive that he slanders the media when he doesn't like teh truth. His doing Trump business while overseeing the nation's business symbolizes governmental corruption of the worse and highest kind..

Things are bad enough with Donald Trump going ballistics, daily, it seems. We surely don’t need the ex-Director of the FBI to go public with his own slapping at Potus, right now, whether the complaints are legitimate or not.

The answer is simple. The issue is one of legality, not politics. The country is in the middle of an international investigation that could bring down a president. i imagine that the United States DOJ and FBI including the Mueller investigation, probably cringe at the sight Comey going rogue. After all, the man is a critical witness in the greatest scandal in American history.  What Comey says matters. His testimony will be important to controversies such as why the Russia investigation began and whether the Clinton investigation was fair.  But, most importantly, his recalling the facts related to his conversations with the president is critical to the issue of criminal obstruction of justice.

His future testimony matters to the legal future of the Trump administration.  What is important is whether Donald Trump made certain statements and took particular actions to obstruct.  Legally, what is critical is whether the Mueller investigation and others trying the case in court or in Congress, find Comey’s testimony and statements accurate and truthful.

Regardless as to how unseemly it is for Comey to spill his soul, in the scheme of history, the swings by Trump and his team are really wild misses. The only thing that really matters is the actual credibilities of the two men relating to Comey's shocking allegations. That is it, nothing more.

Yet Trump and his minions now controlling GOP are bent upon attacking him calling him “LyinComey”.  Their attempts are to sully his reputation any way they can, regardless as to whether their own claims hit any real target.  How comical and pathetically ironic it is that they choose to attack the veracity of an imperfect man who has served this country with distinction, while they try to bolster a man who appears to be in an ever and ongoing battle with the truth.

Regardless as to flurry of attacks trying to bring the towering figure to his knees, the only real bottom line is this—is Comey telling the truth about key events related to the Clinton and Russian investigations and more significantly, to whether the President engaged in criminally obstructed an investigation he has always condemned.

Blame Comey for bring the current fight to the bright lights. His beliefs of morality matter to those who want to listen. His descriptions of the President's dress, hair and other matters that sell books, don't. They only hurt him and continue the well-known narrative of a narcissistic man occupying the White House who can't view the world beyond his own nose.

If the GOP and others in his defense want to smear Comey’s character to question his truth-telling, go for it. They can engage in character assassination until the Russians come home. But, other than trying to dirty a man foolishly trying to make a living by wanting to tell a story to defend his own reputation, the credibility of the department he led and his need to protect America, the ultimate inquiry must be--do they have any information at all that is directly related to whether Comey is or is not telling the truth regarding his interactions with Trump?

In the overall scheme of things, nothing else really matters.

If their goal is to cut Comey down to his knees, they and the world must know that the Former US Attorney and crime-fighting FBI Director stands heads and shoulders over Trump in the battle over credibility. Impartial fact finders claim that Trump lies and false statements have hit historical highs. Comey might have made some key errors, might be profiting from his being fired, might be doing things I hope no FBI Director will ever do. However, Trump couldn't carry Comey's glove when it comes to telling the truth.

So, unless Trump and others can come up with real details that specifically counter Comey's repeated statement of facts related to his interactions with Comey, all they are doing is brawling in smear.  We all know that is how Trump operates and those wanting to attack to make political points still need to put up facts, or shut up.

And, honestly, and absolutely, while it appears the bell has rung and it is too late, the same goes for Jim Comey.

More in this category: « While sky falls on GOP and Trump, history continues Here's the drawing of man allegedly threatened Stormy Daniels »
back to top