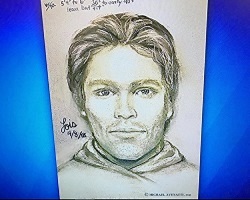 THE VIEW: You recently sat down with the forensic artist a very well known one, who created a sketch of the alleged suspect based on your memory from that day and now you're ready to reveal that sketch for the first time can we take a look at that?

THE VIEW: and to your recollection is that the person that threatened you?

THE VIEW: Stormy, why did you feel that couldn't go to the police when you were threatened?

Two things: First of all, I was scared especially when he told me what not to do and I went home and like regrouped and I was going to, because I always feel like you should stand up for yourself and you should report it but the problem was that in this particular case, instance, I would have gone to the police and would have said, " a man approached me, this is what he said to me, he told me, you know, leave mr. Trump alone and they're very next question the detective would have asked me--.why would somebody tell you to leave Mr. Trump alone?  And I would have had to answer that question, which was not public at the time and I would have had to tell the police, the entire police department and police reports are public record I know that for a fact, I had sex with Donald Trump and then the whole world would have known and I was in the process of trying to quiet that or figure out what to do and and honestly I was just afraid and I didn't want everyone to know I didn't want my family to find out that way.  I didn't want my life turned upside down.

THE VIEW: When you were speaking to news organizations though and Michael, perhaps you can answer this too, including ABC you never brought up the threat ,so why now?  Because I knew it would be asked a question that you were asked.  You just asked me like--"why didn't you say anything?". And I did tell quite a few people actually from back then and

THE VIEW: Who did you tell?

I told family members and two friends and people that i worked with.

ATTORNEY FOR DANIELS: It's obvious that she not going to sit down with the sketch artist and fabricate this, this is a very detailed  sketch it was created by a woman by the end of Lois Gibson, she has the world record for the most identification. She works with the FBI and law enforcement all around the country and she found, she found Stormy to be very credible and is highly confident the sketch and we hope that it's got to

THE VIEW: By this is by memory and this was how many years ago?

THE VIEW: It was seven yers ago and you remember to that detail, it looks like an actor sort of

That's why he stood out to me, is because I thought, honestly that he was sort of handsome. When I saw him and i was parking I that;s somebody's husband. I want to finish answering my question to Megan, honestly one of the main reasons I didn't say anything is because I didn't tell my husband at the time I didn't want him to be upset with me and then I felt like honestly it's so much time has passed I was embarrassed to say something and have them say--

THE VIEW: But your husband knew about the incident with you and Trump in California

At that point in time, he didn't know. So, to go home and "this guy attacked me and by the way  he did this because of this, is why, I didn't want him to think I was a bad mom or put put our daughter in danger. I just didn't know.

THE VIEW: Michael, have you handed this swketch over to the authorities?

Yea, we're not really in a position to really get into who we've shared it with or what the contacts were etcetera, but what we will say is this--is that-- we're offering a $100,000 reward for information leading to the identification of this man and if people go to-- they can send us the information that they have if you send us information that you have and if you positively identify him we're going to pay you $100,000 cuz we  want to get to the bottom of  who this is and we think we know who sent him, we want to confirm it.

THE VIEW: I just need to make a legal note real quickly, the sketch is not evidence that the underlying story is true. Just need to put that out there

ATTORNEY: All that legal..

THE VIEW: Yes, I thought you'd appreciate it

THE VIEW: Do you think the description because it's seven years old will it hold up in a court of law if this person is able to be identified?

ATTORNEY: We believe it will and in fact Lois Gibson has worked with cases that have been much longer than 7 years of age and it has been very successful in getting identifications and having things like that hold up in a court of law, so we're confident that this is going to be another instance and we're hopeful that someone, we know that someone knows something. This man bragged to someone or told somebody about it and we're going to get to the bottom of it

More in this category: « Here's the drawing of man allegedly threatened Stormy Daniels WHIPLASH: Now Trump claims he did not fire Comey due to Russia »
back to top