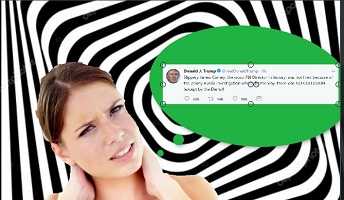 The key phrase of significant importance is that “Comey…was not fired because of the phony Russia investigation”.

Ok. So, why was he fired, President Trump?

For the reasons I outline below, I affirmatively assert your tweet not only makes no sense, it is false.

As a result of this tweet, I surely don’t suspect Special Counsel Robert Mueller will pack up his investigation of obstruction of justice. In fact, something tells me, he will ratchet it up even more.

Nor do I believe that today’s tweet will compel many of you following the Trump Russia mystery-comedy show to forget what you have heard, read and saw last year after the Comey firing and since.  You might remember that immediately after the FBI Director suddenly became the ex-Director, the White House claimed that the sudden discharge was due to Rod Rosenstein’s memo.

That document condemned Comey for his handling of the Hillary Clinton investigation.  That was the inquiry that Comey first relieved Clinton of criminal liability but then a mere eleven days before the elections, Comey announced he had reopened it due to new information.   That was the Comey investigation that Trump cursed during the summer 2016 when Hillary was vindicated. That was the same Clinton investigation and FBI Director which Trump later praised in late October 2016, once his opponent was against the ropes once again under federal scrutiny.

So, for those who are suffering from whiplash--now that the Trump storyline has abruptly changed once again, trust me, you’re not alone.  After all, the White House and Trump have a penchant for reversing their explanations. So, why should a matter of a new flip-flop over Trump’s firing Comey make any difference?

I’m sure you remember the one-eighty from last year both before and immediately after the Comey firing..  A week after the White House said the President had confidence in Comey, Trump’s actions showed otherwise.  Then, after claiming that Comey had been canned because of his mishandling Clinton investigation, Trump told the nation via the Lester Holt NBC interview, he had Russia on his mind when he axed Comey.

So before taking anything for your sudden case of Trump Comey firing whiplash, check out the 2017 timeline leading up to and following the firing. I will post my commentary in parenthesis:

--Comey testified at a House hearing that the Trump campaign was under investigation for Russian collusion.

---During a Senate hearing, Comey testified that reopening the Clinton investigation made him “mildly nauseous” that his decision might have influenced the election.

---After the hearing during a daily briefing and after it was reported that Trump was very angry about Comey’s statement, White House press secretary Sean Spicer said Trump "has confidence" in Comey.

---Days shortly after, reports surfaced that that Comey had asked for more resources for the Russian probe.

---The day that will live in Trump infamy causing our continued confusion,  CNN reported that “Federal prosecutors have issued grand jury subpoenas to associates of former National Security Advisor Michael Flynn seeking business records, as part of the ongoing probe of Russian meddling:

---Hours later, Trump fires Comey and cites in his letter, the Rosenstein memo.

---That night, by the White House shrubs, Spicer confirmed the Rosenstein memo as the reason for the firing.

---Trump met the Russian dignitaries and the White House blocked the US media from photographing it. However, a Russian photo did surface.

---At a briefing later that day, Sarah Huckabee Sanders said that Trump had lost confidence in Comey and that he had thought about firing him ever since election day.  (Perhaps he did, however, he had praised Comey for reopening the Clinton investigation and even kept him in the Director’s office.

---Sanders also claimed that the FBI had lost confidence in Comey.

---Vice President Mike Pence told reporters that he did not think an independent prosecutor was necessary to investigate potential collusion between the Trump campaign and the Russian government.  Pence who reportedly was taking the lead on firing controversy told CNN:

"Let me be very clear that the President's decision to accept the recommendation of the deputy attorney general and the attorney general to remove Director Comey as the head of the FBI was based solely and exclusively on his commitment to the best interests of the American people and to ensuring that the FBI has the trust and confidence of the people this nation,"

---In the same article reporting the interview, CNN stated, “Pence mentioned more than once that Trump's decision was at the recommendation of Rosenstein. A source with knowledge of discussions inside the White House told CNN's Dana Bash that the thinking was that because Democrats were saying precisely what Rosenstein said in a letter explaining the grounds for Comey's dismissal, there would be no backlash”.

---Also, that same day, Trump sat down with Lester Holt for the NBC interview. (Going into that interview, the White House, through the VP Pence was claiming the FBI lost confidence in Comey, Trump considered firing him way back the day of the election, that the reason for the firing was because Rosenstein’s recommendation and that the White House felt there would not be any blowback by the Democrats because they were angry at Comey for reopening the investigation. This strongly appears that they could cite the Rosenstein memo for the firing and the Democrats would not mind the firing. Also, they could claim the memo gave them justification for firing Comey since the FBI was in disarray)

---The acting FBI-Director, Andrew McCabe, during a Congressional hearing testified that “"The majority, the vast majority of FBI employees enjoyed a deep, positive connection to Director Comey," he says.

Did Donald Trump follow that party-line narrative that he fired Comey because of Rosenstein’s memo? No. Instead, Trump said the decision was his, that he was going to fire Comey regardless of the recommendation, which undercut the White House and VP Pence’s spin that it was the memo that the President had accepted that did Comey in.

Here is the pertinent part of that interview:

So, Trump cleared it up for us all on his now-infamous interview on NBC. With Lester Holt.  Let’s go back to last year to May 2017 so we can recall the conversation that really started the obstruction engine in full gear:

Look, he's a showboat. He's a grandstander. The FBI has been in turmoil. You know that. I know that. Everybody knows that. You take a look at the FBI a year ago, it was in virtual turmoil. Less than a year ago. It hasn't recovered from that.

Monday, you met with the Deputy Attorney General Rob Rosenstein. Did you ask for a recommendation?

What I did is, was I going to fire [James] Comey. My decision. It was not.

You had made the decision before they came over...

Because in your letter you said I... I accepted... I accepted their recommendation. So, you had already made the decision.

Oh, I was going to fire regardless of recommendation

He made a recommendation He is highly respected. Very good guy. Very smart guy. The Democrats like him. The Republicans like him. He made a recommendation, but regardless of recommendation I was going to fire Comey, knowing there was no good time to do it. And in fact, when I decided to just do it I said to myself, I said, you know, this Russia thing with Trump and Russia is a made-up story. It's an excuse by the Democrats having lost an election that they should have won. And the reason they should have won it is, the electoral college is almost impossible for a Republican to win. Very hard. Because you start off at such a disadvantage. So, everybody was thinking they should have won the election. This was an excuse for having lost an election.

Are you angry with Mr. Comey because of his Russia investigate

But were you a fan of him taking up that investigation?

I think that... about the Hillary Clinton investigation?

No, about the Russia investigation and possible links between.

No, I don't care... look, look, let me tell you. As far as I'm concerned, I want that thing to be absolutely done properly. When I did this now, I said I probably maybe, will confuse people. Maybe I'll expand that, you know, I'll lengthen the time because... it should be over with, it should... in my opinion, it should have been over with a long time ago, because all it is, is an excuse, But, I said to myself I might even lengthen out the investigation, but I have to do the right thing for the American people. He's the wrong man for that position. [Break]

One week after that interview was broadcasted, the New York Times reported that Trump made this statements at the Oval Office meeting with the Russian officials. That meeting occurred one day prior to the actual filming of the NBC interview with Lester Holt, broadcasted the following night, “

"I just fired the head of the FBI. He was crazy, a real nut job," Trump said, according to the Times. "I faced great pressure because of Russia. That's taken off."

For over one year, Trump’s explanation has been that he fired Comey and he had Russia on his mind and that he was always going to fire Comey. Reported facts indicate that the purpose of obtaining Rosenstein memo was contrived, an excuse or mechanism for the firing.  Not only did Trump emphasize Russia being on his mind when firing, Trump emphasized his state of mind when he told the Russians that he fired the head of the FBI, that he faced great pressure because of Russia. “That’s taken off”.

He did not state to the Russians that he fired the “nutjob” Comey because the FBI had lost confidence in the director. Nor did he state that he was relieved that the pressure was taken off of him and that his agency would be back in better force. No. The focus of his statement was he felt great pressure because of Russia (investigation) and that’s been taken off, meaning, the investigation would likely go away.

Now that eleven months has elapsed, now after he’s been “attorneyed-up”, now that it is very clear that even more facts support his continuous effort to disrupt, diminish, berate and even fire the investigator and Rosenstein overseeing that probe, Trump tweets today that he did not fire Comey because of the investigation.

Ok. So, looking back, what are the possible reasons for his firing Comey?

Last year, Trump told us that Russia was on his mind and that the investigation was bogus. But let us assume that he truly felt the probe was bogus and that it was bringing down his administration and the country. Let us further assume that he believed and evidence would confirm that he was not a subject or a target, so he was not personally not implicated so his actions were for the good of the country.

Assuming all of this to be true and the firing of Comey to be justified, that absolutely does not equate to not firing Comey because of the Russian investigation.  It means that he did.

Thus, despite whiplash, unless provided some other reasonable explanation, I can only assume that Donald Trump fired James Comey because of the Russian investigation.

That is what my eyes and ears, the facts, the timelines, his statements, his reports, and his prior tweets and interviews and later news reporting  clearly and unequivocally tells me.

What does it tell you?