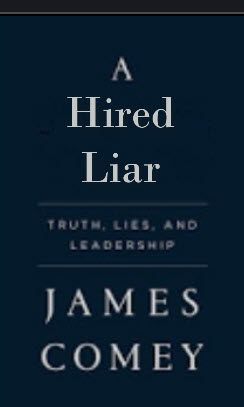 Sad to say that the truth has become a diminishing commodity in America today.  Particularly when it comes to many branches of government.  Remember the old adage that “I’m from the federal government and I’m here to help you?”  Too often, they are here to examine, investigate and even prosecute you.

A prime example of bungling, mismanagement and corruption are the antics, prominently in the news right now, of the FBI leadership. A criminal referral has been made against the former number two in command Andrew McCabe. The inspector general, according to The Washington Post, determined that McCabe lied to investigators four times, three of them while under oath.

This column wrote last week about former FBI head James Comey and his efforts to portray himself as being ethical and above the fray of partisan politics.  Now we learn that Comey is also being investigated for leaking classified documents, and denying that he had done so.  He blew off the matter by saying:  “Good people lie. I think I’m a good person, where I have lied,” Comey said.  So much for his above -board ethics.

Comey obviously adopts the longstanding FBI adage that they can lie to you but you can’t lie to them.  Yale law professor Stephen Carter puts it this way.  “Lying is terribly corrosive and ought to be discouraged, but where law enforcement is concerned, I’ve been telling my students for decades that true respect for justice requires a symmetry. If I’m not allowed to lie to you, then you shouldn’t be allowed to lie to me.”

Carter then puts the onus directly back on the FBI.  “ If felony charges for lying to agents are important in order to preserve the integrity of the system of justice, perhaps felony charges for lying by agents are important too. That way the people who “must fear the consequences of lying in the justice system” would include those who serve the public.”

Comey is saying that the memos he slipped in secret to The Wall Street Journal were his personal work product, and exempt from FBI regulations.  That lame excuse won’t pass muster.  He wrote memos about an FBI investigation on an FBI typewriter.  And he signed a required statement saying that he “will not reveal, by any means, any information or material from or related to FBI files or any other information acquired by virtue of my official employment to any unauthorized recipient without prior official written authorization by the FBI.”

Just last week, a former FBI agent, Terry Albury pleased guilty to leaking classified documents to a news outlet.  This is exactly what Comey did.  Albury is now facing up to 10 years in prison.  Isn’t what’s good for the goose also good for the gander?

The bottom line question is that if McCabe and Comey are guilty of lies under oath and giving out classified documents to the press, then shouldn’t they be prosecuted and face jail time for their actions?  Of course they should.  The consequences of lying or leaking should be a deterrent both to those being investigated as well as the investigators themselves.

The only recourse a private citizen has to protect oneself against devious and false questions by an FBI agent is to tell them nothing.  Here in Louisiana, it’s a rule urged by defense attorneys and recognized by many in the news media.

First there was Watergate and now there is FBI-gate.  Isn’t it a shame that way too often, you just can’t be sure who the bad guys are?

More in this category: « Unlike gift to Obama, Trump's North Korea pressure earning Nobel Peace Prize Last rites for the Republican-controlled Congress in era of Trump? »
back to top