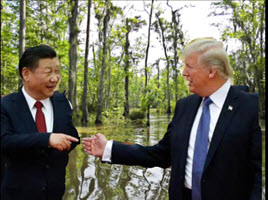 If true, this one should be easy.

President Donald Trump, according to a variety of articles hitting the Internet ,is trying to help a Chinese telecom company ZTE in a controversial move given his prior statements about the Chinese’s business practices. The problem with this mystery transaction is that it might, and I say might, be totally unethical, if not, unlawful.

Over this weekend, many of us were surprised, if not shocked by this Trump tweet in which he stated he would be instructing his Commerce Department to help ZTE .  Given Trump’s campaign statements and post inaugural comments, his intervening in helping the telecom company makes no sense. Alas, unless one factors in coming to some grand bargain with China that could assist the United States apply pressure upon North Korea.

The problem, however, is the telecom has been sanctioned by the United States and has been deemed by members of Trump’s own cabinet as being less than sterling with cyber security. It also does not help that the Trump administration is threatening Europe and European companies with sanctions for their doing business with Iran, now that Trump has pulled out of the Nuclear Deal.

How, the major issue seems to be the timing which perhaps reflects a motivating influence for let’s help Chinese jobs tweet, in the first place.

According to the National Review, China has just announced that it is lending a state-owned construction company, a half billion dollars.  The Trump hotel and golf course is featured in the project.  While the project was under discussion before the elections, it still raises very serious concerns about the potential conflict of interest involving the President, his business and powerful countries we need in the foreign policy arena.

Yep, again, if accurate, the country, China, with whom Trump has previously called all types of bad things, has announced lending a project involving Trump companies, a large cache of money. The President needs China to apply pressure on North Korea. His company, which he still owns but which his sons run, apparently needs China to help fund the deal.

Again, a conflict of interest?  Pretty darn close even if the deal was in the works prior to the elections. This is exactly the type of transaction, along with others, that many screamed about and were told not to worry prior to his inauguration.

A violation of Emolument Clause of the US Constitution?  We’ll see.

The transaction also reminds many of us how Trump’s daughter Ivanka suddenly received some intellectual property approvals, patents, from China, on the same day that she met the Chinese President, many moons ago when Trump first met during the early days of the administration.

On April 6, Ivanka Trump’s company won provisional approval from the Chinese government for three new trademarks, giving it monopoly rights to sell Ivanka brand jewelry, bags and spa services in the world’s second-largest economy. That night, the first daughter and her husband, Jared Kushner, sat next to the president of China and his wife for a steak and Dover sole dinner at Mar-a-Lago.

But, even if there is no self-dealing going on here, at the very minimum, just like the Michael Cohen taking advantage of the presidency, it sure looks like more sleaze paddling up the DC swamp, which many of us anticipated and warned against, it seems now, forever.

More in this category: « Time for President Donald Trump to take action against biased hostile media Trump's pardoning in Mueller, Stormy Daniels probe could be a legal turkey »
back to top