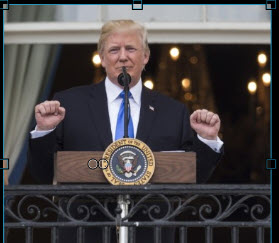 Andrew Lloyd Webber's “Evita” features a song, “On the Balcony of the Casa Rosada,” which contains a warning for politicians overly dependent on a cult of personality;

“We are adored.
“We are loved.
“Statesmanship is more than entertaining peasants.
“We shall see little man.”

No one is being swayed by rhetoric, anymore. Everyone knows Trump will say anything in his own self-service and, like many habitual liars, probably believes the statements he and his spokespeople make despite all objective reality. It’s no matter because, genius or dim, everyone has decided, already, one way or the other, what they wish to believe.

In 1988, the New York Times quoted Arnold Goldberg, a professor of psychiatry at the esteemed Rush Medical College in Chicago, as saying: ''The ability to lie is a human achievement, one of those abilities that tends to set humans apart from all other species.'' Looked at this way, Trump’s regular forays into untruthfulness and inflated speech mark him as one of the highest achievers on earth, testimony of which is his current high position.
A belief that the Russia investigation is the “greatest witch hunt” in human history will become, in time, more of a sociological anomaly than averment to be taken at face value. The long view is that Trump’s policies will determine his place in history, where his reputation for veracity will merit little more than a footnote in the grand scheme of things.

If Trump wishes to preserve power he ought to ask his surrogates, (and himself), to refrain from the fire and brimstone hurled against American institutions, like the FBI and the DOJ, and permit Mueller to continue the painstaking process of trying to piece together the facts of what appears to be a multi-national effort to elect him as president.

Fact is, Mueller doesn’t have enough lawyers to put together this complex of a case in ten years, even though he has some of the most gifted practitioners in the country toiling beneath him. Further, the requirements to impeach a president are massive and, here, go far beyond a little blue dress, or improvidently made tapes. Absent more facts, make book that Trump will be golfing out his last days long before he’s convicted of anything.
The president might revel in this luxury of time, and the complexities of proof, instead of panicking and sending minions out to engage in clownish behavior that only serves to demean his presidency and, perhaps, speed its end, prematurely. That’s a truth Trump should take to heart.