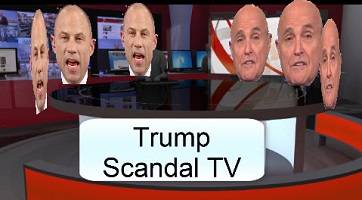 In a parallel universe, a federal judge in New York has ruled, in the Michael Cohen search and seizure case, that Michael Avenatti, the CA attorney for porn star Stormy Daniels, cannot intervene in the matter before her if he continues to talk out of turn, release evidence, and give press conferences. The ruling has implications for Donald Trump and his new personal attorney for Russia, Giuliani, who replaced Cohen and, also, talks out of turn, releases inside information, and talks to the press as often, if not more so, than Avenatti. They’re bookends in intertwined scandals that have gripped the nation and hobbled, of necessity, good governance.

The existence of tapes, possibly spanning years of interactions between Cohen and Trump, was a stunning revelation in the case with implications for the Mueller investigation which had, initially, sent the Cohen matter to the U.S. Attorney’s office for the Southern District of New York. Donald Trump had personally interviewed the U.S. Attorney he appointed to head the SDNY office, Geoffrey Berman. On April 10, 2018, ABC reported Berman had recused himself from the Michael Cohen investigation with the concurrence of Deputy Attorney General Rod Rosenstein.

Avenatti, for his part, claims that there’s something more the American people need to know about the affair Donald Trump is alleged to have had with his client in Beverly Hills, years before, at a hotel owned by the Sultan of Brunei. Thanks to an amateurish settlement and non-disclosure agreement that includes pseudonyms for Trump and Daniels, speculation abounds about what she may know about Trump’s secret life, if there’s even such a thing since the president talks about himself constantly, including about his anatomy, hair excepted.

The New York intervention, presumably, was sought to obtain evidence that Cohen’s $130,000 payment to Daniels, on behalf of Donald Trump, was improperly sourced, and/or that there was impermissible collusion between Daniels then attorney, Keith Davidson and Cohen. He may be right on either, or both counts, but disinclined to refrain from speaking out, Avenatti withdrew his motion to intervene and, immediately, gabbed to the press on the courthouse steps before going on TV that night to yak some more.

Rudy Giuliani has been doing a lot of talking, too, about Daniels, and Russia, which is of considerable more consequence than whether the president keeps his socks on when he, ahem, if Daniels was in any position to know, that is. The alleged link between Daniels and the Russia investigation established under auspices of the Department of Justice, is the not so veiled allegation that foreigners may have paid for the Daniels settlement which may, or may not have been, an illegal campaign contribution, a question of a fact.

Giuliani has declared himself a person with intimate, insider, knowledge of all things Trump, and has weighed in, repeatedly, and most cartoonishly, when he called James Comey, whose firing led to the appointment of the special counsel, a “Baby.” As a percipient witness, however, Giuliani’s continued representation of Trump might be ethically prohibited. As Ollie told Stan, and Trump may say to Rudy one day, “That’s another fine mess you’ve gotten us into.”