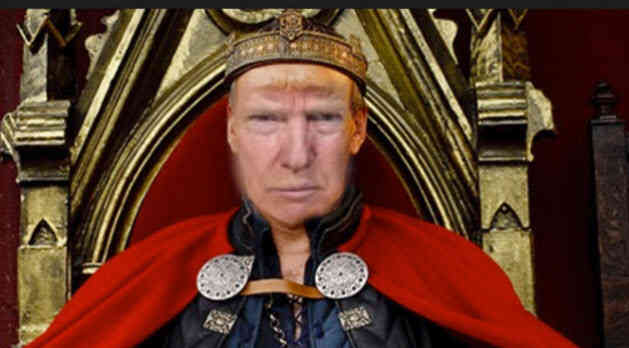 There’s a problem, though, in the first example, because if a crime is imaginary there’s a substantive legal question about whether the pardon, alike, is illusory. To test this contention, Trump should issue himself a pardon as soon as possible to speed resolution of the legal contentions he’s raised. It’s only fair to the public.

Will the benefits outweigh the risks? Likely not, if for no other reason than it may put another nail in the coffin of a Republican party that blindly follows Trump anywhere, ignoring the fact he’s a party of one. Trump threatens to give modern meaning to Louis XV’s most famous utterance, “Après moi le deluge.”

Rather than waiting for Robert Mueller to find him blameless in Russian meddling during the 2016 election, Trump has waged war on the FBI and Department of Justice which, he alleges, are part of a “deep state” trying to remove him from power. Republicans, sadly, ignore that the negative pregnant of “deep state” is “shallow state,” casting them in an unfavorable light.

Fact is, it’s Trump’s petulant actions that make him look guilty, not Mueller, who’s been mum. The president misses that it’d be far easier for Democrats to vote him out than unleash the type of trauma Richard Nixon worked on the country and the, Republican Party. In time, it’ll bear the burden of this president’s paranoia, or whatever he may be hiding, if anything.

Pardoning himself won’t do anything, either, for others still in jeopardy, unless Trump pardons them, too, risking charges of obstruction of justice. Shutting down the Mueller investigation, also, falls in this category. There’s no authority for the position that the DOJ must act on a president’s whims about who, what, when, and where DOJ investigates, or doesn’t. It’s well settled that arbitrary exercises of authority violate the 14th Amendment’s due process clause.

A lesser contention, raised by Trump’s lawyers, is that the president cannot be subpoenaed to testify.  It’s baseless. The Supreme Court has weighed in on this topic, analogously, with precedents involving Richard Nixon and Bill Clinton. The president will lose this argument and, if anything, the absence of personal jeopardy to Trump, after a pardon, only strengthens the argument that the president should be forced to testify against his subordinates.

Ultimately, the Republican Party is what’s a stake in this fight and it should choose sides wisely if it wishes to survive.