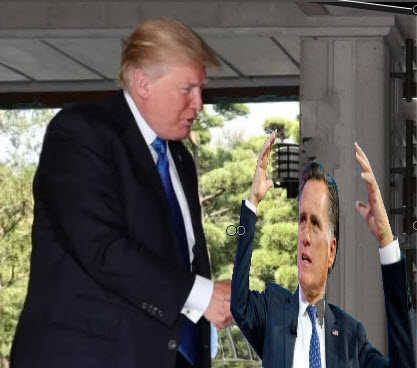 In the 2012 presidential campaign, Republican nominee Mitt Romney had victory in his sights after a strong first debate performance against the incumbent, Barack Obama. Instead of continuing to campaign on the offensive, Romney decided to play defense, tamp down his criticism of Obama and finish the race on a positive note.

This lamebrain strategy failed miserably as Romney lost the final two debates, in which he refused to vigorously condemn Obama and his horrible policies. Not surprisingly, Obama won the election as Romney was denied the presidency a second time.

In 2016, Romney no doubt aspired to run again, but he encountered the phenomenon known as Donald Trump. Romney could not run as a businessman, since Trump was wealthier and more successful, nor could he run as an outsider, since Trump was the real political novice, never having run for office before.

Instead of launching another losing campaign, Romney declared he was not running, and focused his efforts on bashing the GOP frontrunner, Donald Trump. He called Trump a “fraud,” and a “phony” and encouraged people to support any other candidate.

When his strategy failed in the party primary elections and Trump won the GOP nomination, Romney encouraged Americans to vote third party in the general election. Romney expressed interest in supporting the Libertarian Party ticket and his campaign rented his donor list to a true gadfly, Evan McMullen, an Independent presidential candidate.

In the end, Romney admitted he voted for his wife, Ann, for President. His disgust with Trump was so great that he was willing to tip the presidential election to a corrupt liberal, Hilary Clinton.

{gspeech style=3 language=en}Custom text to speech{/gspeech}Since the President’s victory, Romney has been a very lukewarm supporter at best. While he did interview for the position of Secretary of State and have dinner with President Trump, he offered criticism on a number of issues, including the response to the riots in Charlottesville, Virginia.

In recent weeks, his tune has changed after he decided to run for the United States Senate seat in Utah, being vacated by the retiring Orrin Hatch. While the President graciously endorsed him, Romney still did not commit to support Trump in the 2020 election. In addition, Romney claimed that President Trump is not a good “role model for my grandkids on the basis of his personal style,” Nevertheless, at his “Experts and Enthusiasts” business and political summit yesterday, Romney made some interesting predictions. Not only did he predict that Trump would “easily” win the GOP nomination again, but he also claimed that the President would “solidly” win re-election in 2020.

These comments were offered by a Senate candidate who is running against a more conservative challenger, Dr. Mike Kennedy, in Utah’s GOP primary on June 26. He realizes that the President has support among Republican voters and does not want to alienate the base of the party.

The problem for Romney is his history of negative comments about President Trump. In reality, he tried much harder to deny the White House to President Trump in 2016 than he tried to attack Barack Obama in the 2012 presidential race.

At 71 years old, he is facing his last change to remain politically relevant, so he has to beat this GOP opponent and win the U.S. Senate election. Continuing a fight against a President who is popular in his own party is a very dumb idea. Thus, the change of heart for Romney.

It also might help that President Trump has been extremely successful in both economic and foreign policies. Even the former Trump hater Romney had to admit, “I believe his policies have been by and large a good deal better than I might have expected.”

At least Romney has the good sense to realize the President is producing for the American people. As a candidate, Donald Trump did not claim he was a saint in his personal life, he only claimed that he would “Make America Great Again!” On that score, President Trump seems to be convincing even some of his harshest critics, like Mitt Romney.