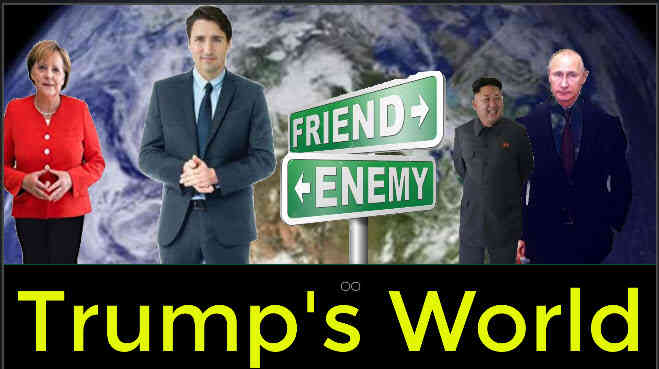 Canada’s Justin Trudeau is an earnest young altruist who believes human nature is essentially good, and public service a noble calling with the end of elevating everyone. That makes him an outlier, a weakling in a world where spoils accrue, more often than not, to the strong, in places where the last shall never be first, and consensus building is a fault.

The prime minister wouldn’t last long in an America transformed, seemingly overnight, into duchies of self-interest that vie with each other for superiority. Even the good guys, whoever they may be at any given moment, recite the mantra that politics is a dirty business; and so it is, by way of self-fulfilling prophecy.

That’s too challenging a topic to contemplate at the moment, however, because there’s a repressive regime that, ostensibly, is an immediate  threat to life on the planet, as we know it. Having alienated Trudeau, and America’s allies at the G-7 by promoting Russia, among other things, Donald Trump is set to blandish before the brutal young North Korean strongman, Kim Jong Un, if only he refrains from future bad acts, security for the Kim family dictatorship, and riches galore.

Simply put, it’s a bribe. While we taunt our allies with threats of economic sanctions, in the form of tariffs, lucre will fall from heaven on North Korea. Ever prescient, Trump will know, he says, “in two minutes,” if Kim is serious about taking his blighted country from starvation, darkness, and universal opprobrium, on account of human rights violations, to the status of a great, respected, and prosperous nation.

Trump, personally, needs the meeting with Kim to be a success. In its absence, there will be even more to fear from investigations that’ve cast a pall over his legitimacy. No matter that Singapore threatens to give new meaning to the phrase the end justifies the means, because even Trump detractors, it’s thought, will be forced to admit that eight years of his presidency is a small price to pay for world peace. That assumes, of course, that the threat from North Korea was real, in the first place, and that Kim will abide by any agreements reached.

There’s a lurking suspicion, in some quarters, that Kim’s rhetoric may be fiercer than his bite, and that he’s little more than an insincere opportunist engaged in a cagey strategy. Though it’s never been clear whether Kim’s once technologically challenged backwater is a serious threat, it’s good to talk. It’s, also, good to recall words often attributed to Theodore Roosevelt, but nonetheless true, regardless of authorship: “The things that will destroy America are prosperity-at-any-price, peace-at-any-price, safety-first instead of duty first, the love of soft living, and the get-rich-quick theory of life.” With that admonition in mind, Godspeed.