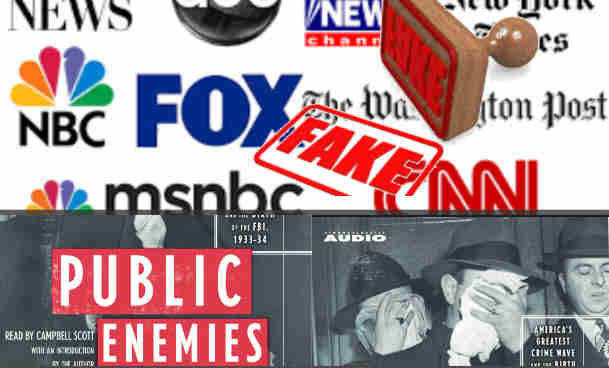 A free press has served Americans in many positive ways since the founding of our nation. We need a free press to serve as a watchdog on our government and to keep our politicians honest. We are also dependent on the press to inform us about corruption, the waste of taxpayer money, and the abuse of political power.

Unfortunately, journalism has become corrupted through the years. In the past, great reporters only had a commitment to undercover the truth, no matter the political consequences. Today, journalism has become infected with mostly staunch liberal reporters who spend their time pursuing stories in an effort to harm Republicans, especially conservatives. Their greatest joy is to undercover or report negative stories about President Donald Trump, a person they truly despise. In fact, many of these corrupt liberal reporters have no qualms about manufacturing negative Trump stories if necessary.

Journalism started moving in a very liberal direction around the time of the Vietnam War and the Watergate scandal. Bob Woodward and Carl Bernstein of the Washington Post were instrumental in forcing President Richard Nixon to resign.

Since then, the goal of many reporters has been to recreate that successful outcome with another Republican President. They tried mightily to oust President Ronald Reagan during the Iran-Contra scandal, but they failed. Unfortunately for liberal journalists, Reagan left office with a high approval rating.

While Bill Clinton gave reporters plenty of fodder with his many misdeeds, most of the liberal D.C. press corps had no appetite to pursue the Lewinsky scandal. Their support of Clinton was so obvious that if not for the Drudge Report, the dishonorable behavior of Bill Clinton may have never been reported. The new conservative website forced the more traditional media outlets, kicking and screaming, into covering the story.

During the Obama years, political journalists spent most of their time defending the President. This completely changed after the election of Donald Trump as President. Since then, the media coverage has been over 90% negative, according to the Media Research Center.

Sadly, President Trump is right about the media today. It is “Fake News, especially NBC and CNN.” He also tweeted that “Our Country’s biggest enemy is the Fake News so easily promulgated by fools!”

As CNN regularly dispenses Trump hatred and “Fake News,” their ratings have fallen dramatically. Nevertheless, CNN President Jeff Zucker was amazingly given a contract extension through the 2020 election.

Since his appointment in 2013, Zucker has destroyed CNN’s reputation and ratings. The network used to be known for presenting both sides of the political debate, like the famous Crossfire debate program. Today, all of CNN’s hosts are liberal, as well as almost every one of their so-called “analysts.”

Acosta is not the only CNN reporter with bad manners. On Thursday, CNN “political analyst” Brian Karem started screaming at Sanders during her regular press briefing. Karem berated Sanders as a “mother” and lambasted her for not showing enough concern for the illegal aliens and their children who are separated at the border.

Karem would have never tried this stunt during the Obama administration. In fact, while Obama was President, White House reporters were always on their best behavior, dutifully serving up softball questions or lavish praise for their hero.

Today, President Trump and his White House staff are treated horribly and regularly have to endure insulting and unfair questioning.

The double standard will continue, but the ratings for the liberal news outlets like CNN will continue to fall. This dynamic will lead to the creation of more news alternatives for conservatives and all Americans who care about the truth. This newfound media environment is a positive development and will give Americans more journalistic diversity. However, it is also a direct result of the corruption in American journalism today.

More in this category: « IG Horowitz report ugly for Comey, lovers but irrelevant to Trump Russia probe Trump's gains are dogged by his separating immigrant children from parents policy »
back to top