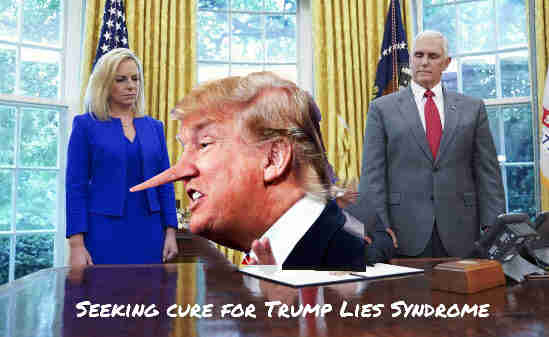 He said that this practice has gone on for decades years and that he was ending it.  His Vice President and Secretary of Homeland Security thanked him for his wise leadership to finally putting an end to a practice that other presidents could not and did not do.  Shades from his North Korea meeting of doing what no other president could do. They have the script. They’ve tweaked it to perfection.

Yes, he did a birther. You remember that Trump, with weeks left to go in the campaign suddenly, needing African American votes, said he was ending the birther issue.  He took no questions. He made no apologies. He did not explain nor has he ever explained why and how he came to the conclusion that the American President Barack Obama was born in the United States. For half a decade, Trump led the birther charge, never negated the claim until a press conference at the new Trump International hotel in which he ended his lie without acknowledging that he pretty much alone had fanned the flames.

Today, amid the intense outcry that he and his administration had created a policy that separated large number of children from their immigrant parents, he again caved in.

No. Instead, he pretended as if he, on his own, changed the course of immigration history without any pressure or outside influence.

He did not state that due to his own policy, the anger against his administration had gotten so acute that he, overnight, decided to reverse course. Yesterday, his position was only Congress could stop the policy. Today, he full-stopped it, since he had full-inflamed it.

After Trump spoke today, his Secretary of Homeland Security took the floor and thanked Trump for the policy change. My lord. Secretary Nielson was the same Trump official who told the media earlier this week that there was no policy. So, how can one change a policy that does not exist? Go figure.

Am I pleased that Donald Trump saw the handwriting on the wall and unilaterally put the pin back into his own self-made hand grenade, that was exploding in his face?

Absolutely. I hope that those children who have not seen their parent or parents do so sooner rather than later. I’m delighted that President Trump abruptly reversed course.

However, let us not fool ourselves. Donald Trump was not man enough, not leader enough to say, “Folks, I messed up. I am reversing the policy our administration implemented.  Prior to this spring, we did not have anything close to the separated families until we implemented this severe program.  Not even close. After we embarked upon this new immigration policy, the floodgates opened. We claimed it was the democrats fault. We claimed only Congress could reverse it. We claimed that this was God’s will. We failed to articulate the law that we said compelled our “zero tolerance program”.  We didn’t because we couldn’t. There was no law on the books. We made it up, claimed we had to separate to enforce the law. We mandated for the first time ever, that the immigrant parent would be criminalized facing misdeameanor and the child would be forced to be without. I am sorry for the confusion, I am sorry for the anger that resulted from our own mistake. I am sorry for our deceptions”.

A real leader of people tells the truth, does not deceive, even when his or her political future is on the line.  When caught in a falsehood, a real leader owns up. He does not counterattack and blame others.

Donald Trump is anything but that leader.

He alone is responsible for Trump Lies Syndrome.

He alone is causing the reacting Trump Derangement Syndrome to combust. We see his lies get longer and more frequent. We see him covering one falsehood after another.

He alone can give birth to credibility for his administration.

He alone chooses to “birtherize” his mistakes, which is not only very sad and dishonest, but very dangerous.

There must be zero tolerance for Trump Lies Syndrome.

Our future depends upon it.