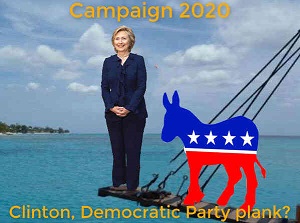 During the ascendancy of Donald Trump to the top of the Republican Party and the presidency, the media has devoted plenty of attention to the in-fighting in the GOP. Trump overthrew the establishment by defeating 16 Republican challengers and winning the nomination.
Ever since then, a dedicated band of GOP “Never Trumpers” has criticized the President’s every move and given plenty of support to the media and Democrat opponents of his agenda. Fortunately, President Trump has marginalized this group and solidified his support among Republicans. Recent polls have shown the President maintaining an astounding 90% approval rating among Republican voters.
The real political division now exists in the Democratic Party. The party is led by polarizing figures in both houses of Congress. House Minority Leader Nancy Pelosi (D-CA) has been in Congress since 1987 and has served as leader of House Democrats since 2006. She is 78 years old and has been shaky in recent interviews, forgetting names and appearing confused.
Senate Minority Leader Chuck Schumer (D-NY) has been in elected office since 1975 and has served in Congress since 1981. He has been in the Senate for almost 20 years, certainly qualifying as a card-carrying member of the political establishment.
The problem for Democrats is that the party is sprinting to the political left. The favored philosophy is no longer liberalism or progressivism, it is now socialism. The clearest evidence can be seen in the recent victory of 28-year-old Latina socialist Alexandria Ocasio-Cortez. She defeated Congressman Joe Crowley (D-NY) in the June Democratic primary. Crowley served in the powerful 4th ranking position among House Democrats and was a ten term Congressman. He espoused all of the party’s typical positions on taxes, healthcare, immigration, etc. yet he did not generate enough support among minorities and young voters, the base of the Democratic Party.
As the Democrats move left, a real question becomes what will happen in the 2020 presidential nomination race. Will socialist U.S. Senator Bernie Sanders of Vermont run again; or will a younger far-left candidate take his place? Will potential candidates like U.S. Senator Kamala Harris (D-CA) or U.S. Senator Elizabeth Warren (D-MA) be viewed as sufficiently left wing by the base of the party?
Potentially, the field of candidates for the 2020 presidential nomination will be vast, but the number could shrink dramatically if Hillary Clinton enters the race again. Clinton, who lost the 2008 and 2016 presidential races, is a horrible candidate who inspires true hatred from millions of Americans. While she has her staunch supporters, she is not a candidate that is beloved by even her fiercest advocates.
Reports have circulated over the last week that Clinton is looking at running for President in 2020. She has the advantage of universal name recognition, a massive fundraising operation and a network of skilled political operatives. The problem is her unpleasant personality and her stale message would not inspire a robust turnout of Democratic Party voters.
If Clinton could not beat an upstart Democratic Senator for her party’s nomination in 2008 or a novice politician in 2016, there is little chance she could beat an incumbent President in 2020. In fact, Clinton needed a rigged primary system and unfair assistance from the Democratic National Committee to defeat Sanders for the Democratic Party’s presidential nomination in 2016.
In both of her previous losses, Clinton had the political establishment on her side. She had financial advantages as well. For example, in her race against Trump, Clinton amassed a war chest twice as large as Trump. She had 95% of the media supporting her and decades of political experience on her team that Trump did not possess, yet she still lost in an Electoral College landslide.
Ever since then, Clinton has refused to leave the political arena. She has constantly whined about the loss and blamed everyone else except herself. She has the power to probably wrest the 2020 presidential nomination from any of other candidates, but, if victorious, she would deal a tremendous blow to the Democratic Party and become a three-time loser as a presidential candidate. It will be interesting to see if there are voices of sanity in her inner circle who can successful persuade her against letting her ego overwhelm the cold hard facts of political reality.
Jeff Crouere is a native New Orleanian and his award winning program, “Ringside Politics,” airs locally at 7:30 p.m. Fridays and at 10:00 p.m. Sundays on PBS affiliate WLAE-TV, Channel 32, and from 7-11 a.m. weekdays on WGSO 990-AM & www.Wgso.com. He is a political columnist, the author of America's Last Chance and provides regular commentaries on the Jeff Crouere YouTube channel and on www.JeffCrouere.com. For more information, email him at [email protected]
\