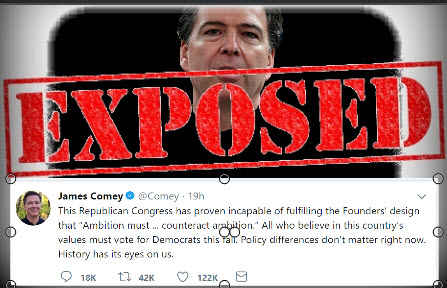 Yesterday, all appearances of impartiality were demolished as Comey finally decided to let everyone know his true political leanings. He tweeted “This Republican Congress has proven incapable of fulfilling the Founders’ design that ‘Ambition must … counteract ambition.’ All who believe in this country’s values must vote for Democrats this fall. Policy differences don’t matter right now. History has its eyes on us.”

There are a number of reasons why Comey would like the Democrats to take control of Congress. It has nothing to do with “values,” or our “Founders’ design,” but it has everything to do with the ongoing investigations into the Department of Justice.

In most mid-term elections, the political power not controlling the White House gains seats in Congress. If the election were held today, Democrats would take control of Congress. With history and current polling on their side, the Department of Justice is content to play games with Republican congressional investigators for the next few months.

Sadly, this obstruction has been going on for too long. According to House Intelligence Committee Chairman Devin Nunes (R-CA), the Department of Justice has engaged in “seven or eight months of stonewalling.” In a recent interview, Nunes said that "100 percent, [the FBI and DOJ] are putting all their chips on the Republicans losing the House and all these investigations will shut down."

Nunes and House Judiciary Committee Chairman Bob Goodlatte (R-VA), as well as House Oversight Committee Chairman Trey Gowdy (R-SC) have been requesting documents on the federal investigation into the Trump campaign, the Foreign Intelligence Surveillance Act process and the inquiry into Hillary Clinton’s email server. Unfortunately, Department of Justice officials have been uncooperative and only minimal documents have been produced.

The real goal for Comey and his allies in the Department of Justice is not just to end the Republican congressional investigation. They want Democrats to take control of the House so they will have the political power to launch impeachment hearings against President Trump.

This will be sweet revenge for Comey against the man who fired and humiliated him. The question is whether the American people will support this personal vendetta or whether they truly want to uncover the truth of what happened in the 2016 election.

More in this category: « Kennedy, GOP in the media-frenzied "shark tank" due to Trump-Putin? Trump stars in Theater of the Absurd with his policies Putin »
back to top