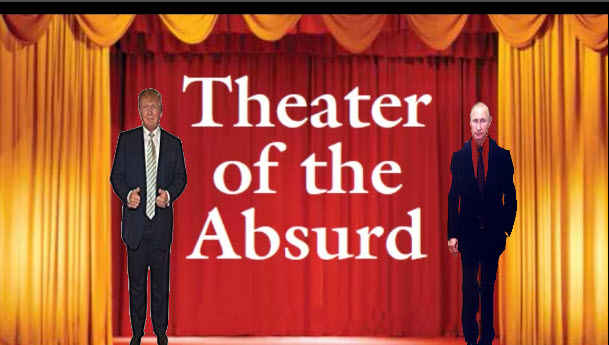 We’ve taken up residence in a theater of the absurd and, while entertaining, at some point president Donald Trump’s followers will have to answer the question, is the ticket worth the price?

Donald Trump has ushered in a woulda, coulda, shoulda era where yes means no, and vice-versa. The strangest thing is that the people enabling him, seemingly, could care less, nor will they, one suspects, till their tap water runs dark, grandma or grandpa takes a fall, or the spot inside a neighbor’s kid goes malignant and there’s no insurance; pensions get cut; employers leave for elsewhere to stave off the bite of tariffs; and, nobody, they’ll say, could have foreseen anything like this.

Consider, too, what’s hidden from view, the things no one is talking about, like the secret agreements Trump struck with Putin in Helsinki. It’d be presumptuous to speculate that the deal was akin to a division of the world between Russia and America, the way Spain and Portugal divvied the place up in 1494. That would be too provocative to think, but something was decided when Trump and Putin confabbed, privately, and no one, so far, knows what that might be, except for the Russians who’ve announced a desire for Trump to get on with it, whatever that may be.

The president might want to invite Putin to the military parade that’s scheduled for Washington, D.C. on Veterans’ Day, November 11. The Russians fought alongside the Allies in WWII, after they divorced the Axis, their first bride. Eastern Europe was their prize. Russian leaders no longer bang their shoes on U.N. desks the way Nikita Khrushchev once did. Putin is far smoother and can be very charming. He gave former secretary of state Rex Tillerson a friendship medal for good oil deals, is a sportsman who just hosted an exciting World Cup, and can be a hospitable person, so while we’re on good terms, thanks to Trump’s ministrations, welcome Comrade!

More in this category: « Comey's vendetta against Trump, GOP finally exposed with his tweet Crouere: Jeanine Pirro, victim of abusive The View whoopi and hollering »
back to top