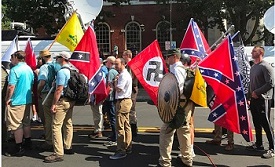 Instead of posting a response on Facebook, I decided to write my response here. So, here goes:

My Facebook friend, allow me to respond--as this video, to me, is propaganda and misleading by those making and promoting the video.

First, historically, the video is absolutely correct in part. The Democratic Party for well over one hundred years was in so many ways, the party of white power. That changed in the 60's to 80's and so far, beyond.

Many of Trump’s avid supporters are quick to try to expose what they claim is Democratic Party and liberal hypocrisy.  When Trump and others on the right get criticized for being racially insensitive, or worse, out comes the “Democrats are the racists videos”. For the past 30 to 40 years, the Democrats have been the “non-white” power base and the Republican Party has taken its place as defending some of the same repugnant beliefs previously held by so many Democrats.

For example, during the recent election, pro-Trump backers posted pictures of Robert Byrd and Hillary Clinton, a photograph taken when she was US Senator.  Their arguments were essentially, “he was a former Klansman, she is embracing him, therefore, she is a racist”.

True, Byrd, as a Democrat was a member of the klan. It appears that status changed during the 50’s-60’s.  Since then, he changed, reformed, redeemed his life.  He became a strong advocate for civil rights.  The world changed, Byrd helped lead that change, yet, those who don’t see his actions and changes, in my view, are simply ignorant to the facts or they simply refuse to admit obvious truths. Instead, they seem to want to hold on to a symbol that simply does not exist and are doing so, for defensive political reasons and advantages

So, here is the question to ask-- today and for the past 30 years or so, which party has attracted the klan and the neo nazis? Which party has attracted those who are still fighting for the glory of the South and the civil war? Which party will be defending the rights of the KKK and the wacko Nazis when they meet tomorrow at Washington DC for the one year anniversary of Charlottesville? The answer is so obvious. It is not the Democratic Party at all. It will be the extremists residing among the Republican Party.

I am not saying the Republican Party are full of racists and black haters? Absolutely not. In 2016, I would have voted for anyone of four Republican candidates for president over any Democrat. At the bottom of the list were Bobby Jindal, Donald Trump, Hillary Clinton and Bernie Sanders.  So, it is not the political party that should be denounced, just as it is not the Democratic Party members who should be targeted.

And Donald Trump is not helping the party one bit. He is constantly making statements and tweets, especially when he lashes out against certain blacks or responding to attacks by African Americans. His response is that the black person who is criticizing is mentally-deficient.  He is simply continuing the  stereotypes that the Democrats started. The more the Republicans embrace him and defend him on these points or fail to speak out, the more they try to divert the topic, the more they are going to be branded as the party against blacks and other minorities.

You simply don’t state that certain countries are S-hole nations and not be considered racially insensitive. You surely don’t call certain populations of people trying to find a better life, worse than rapists—without the counter-response charging racism. You don’t ban whole religions as he did with the Muslim Ban, part one.

My response is not a defense of the current Democratic party, far from. Indeed, there are people in the party or who the party defends that I think in their zeal to support their anti-bias beliefs do things and say things that do just the opposite. The NY Times hiring of a woman who clearly should not be a columnist for that paper for what she has tweeted is a good example. The statements made by certain high-profile people such as Maxine Waters, the Rev. Sharpton etc, to me, are more hurtful than helpful. Many of the actions sometimes taken by Antifa, in their quest to eradicate hate violates the very principles they defend.

However, this perversion of historical fact, which this video appears to be doing--to deflect and to blame the opposition for the very thing many of the backers of the video supports, is a departure from the harsh reality of today and frankly, in my opinion, is simply and wrongfully misplaced.