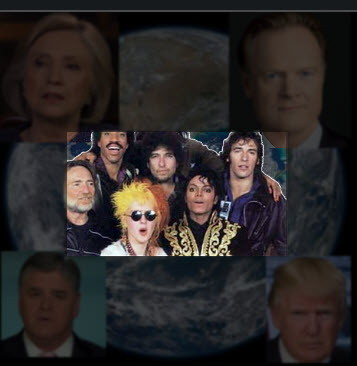 After watching and then re-watching the video, I posted on Facebook, Is it too late? Did we blow it? How do we get it back

Technically, the song was created as a charity single for the benefit of Africa in 1985 which was suffering from a deadly food famine/p>

But, my questions were not targeted at that, at all

The lyrics and message which are repeated throughout by refrain start with:

There comes a time, When we heed a certain call, When the world must come together as one, There are people dying, Oh, and it's time to lend a hand to life, The greatest gift of all, We can't go on, Pretending day-by-day, That someone, somewhere soon make a change, We're all a part of God's great big family, And the truth, you know, love is all we need, We are the world, We are the children, We are the ones who make a brighter day, so let's start giving, There's a choice we're making, We're saving our own lives
It's true we'll make a better day, just you and me

It was not only the words and the incredibly emotional music that moved me in 2018 as it did almost daily when I listened to the song over 30 years ago. Not the words or the music, but the moment. It was a time when the greatest egos one could place in one town were told in advance by a sign outside of the studio, warning the superstars of mega-superstars to leave their egos outside

And indeed, from the emotions of love emanated from their faces and the calmness and hopes evidenced within their voices, it appears, that is what they did

This country, once again, is going through incredible emotional upheaval. The year 2018 has many similarities to the intense disgust, fear and horrors of 1968, fifty years ago. Then, like now, we were embracing an election year, then it was the presidential contest, this time, mid-terms but with the president on the ballot, like perhaps never before.

But now, unlike then, I really wonder in my heart whether this country will make it another fifty years. The vile hate I am witnessing thanks to social media, the silos we are building with our preferred cable channels and news sites, the literal screaming we are doing at one another, are all reasons I question if this country will survive intact. For better or for worst, our country has become the polar opposite of “We are the World”. It is now, We are us, only”.

The love, the good faith, the hope, the desire to reach out and touch our neighbors have evolved into recriminations about which political party is the most dangerous, the most divisive, the angriest, the more deplorable. We are self-righteous in our cause, unwilling to ever admit our faults, not able to understand the messages presented by those we oppose.

Even when proven wrong, we need to be right. Ever trying to be right, we try harder to prove them wrong.

So, the embracing, inspiring music and message of “We are the World” that I felt then might lift all of us to a higher cause, right now, seems only a memory gone by. Is it too late? Did we blow it? How do we get it back?

My answer is, no, I hope not and I simply don’t know. However, I do know one thing for certain. This world is much larger than all of us. And we are the world of today and of the future. All of us. That is, only if we really care.

The one overriding thought: what can each of us do to ensure the world remains “we” and not just “mine”?

My answer? I don’t know.

I don’t think we have heard that certain call.

More in this category: « Trump, Kanye oval office reality TV show gets an Emmy for weird Despite media bias, Beto no Obama, Cruz might cruise in Texas US Senate race? »
back to top